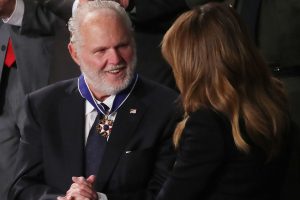 It may seem like we’re on an express elevator to hell. Maybe we’ve hit a tipping point, maybe we haven’t. But I submit to you, gentle reader, there is one reason we haven’t already slid this great country into a socialist hellscape. One man who stood, initially and literally alone, like Horatio at the bridge and stymied, befuddled and confused–and infuriated–The Left. That man was America’s Anchorman, The Doctor of Democracy, The Last Man Standing: Rush Limbaugh.

For more than 33 years, Rush has fought for truth, justice, and the American way. There were no conservative media when Rush started out. To whatever extent we Americans have a conservative micron of a fraction of a sliver of the media now, we have Rush to thank. Rush, who stood alone, taught us how to fight, stiffened our resolve, and gave us the tools we need to win the ideological conflict and preserve this Republic–if only we would use them.

Rush put the lie to the never-ending quest for bipartisanship with the dishonest, authoritarian Left, as embodied by the Democratic Party. “If someone wants you to drink a cup of poison, and you negotiate so that you only drink half a cup of poison, is that a win?” Amen.

The wise listener pays attention when Rush speaks. It’s imprudent not to listen to the sage advice and counsel of a powerful, influential member of the media who is almost always right 99.8%; of the time–even with half his brain tied behind his back, just to make it fair. When Rush picks up in his formerly nicotine-stained fingers and remarks upon an item from his stack of stuff, one knows that a smackdown on the left is about to occur. Not that Rush was ever purposefully combative or caustic–it’s just that he would wake up, minding his own business, and see the institutions of this great country being run down, and responded.

Rush taught us to reject the premise of Democrat/leftist assertions and arguments. Give them not a fig leaf of credibility or legitimacy when they run down our great country, its institutions, or the people who believe we should be governed by our Constitution, understood as the Founders intended. Reject the premise and assault what they really mean.

Rush taught us to assault the Left’s premises not with rancor and scathing words, but with humor. His nicknames for Democrat politicians helped make them, and thus their insane ideology, objects to laugh at. Who can forget “Dingy” Harry Reid, Patrick “Leaky” Leahy, or Adam “Pencil Neck” Schiff, among a plethora of other appellations? Rush’s sense of humor is always genuine, deceptively subtle (once you think about it for just a moment), and spot-on accurate for perforating Leftist superciliousness. Is there any better way to illustrate absurdity than by being absurd?

Even, maybe especially, when he isn’t eviscerating the Left, he is funny and often hilarious. Usually, listening to Rush in my car, he elicits an “I see what you did there” grin from me. Sometimes, he generates a for real, pull-over-or-you’ll-wreck-or-go-into-the-ditch guffaw from me.

Example: One time before he was going to take a trip, he took an extra day off because he had to pack. Somebody (probably Bo Snerdley) obviously wisecracked on their internal comms something like, “C’mon, man! You don’t pack. You have people for that!”

Another time, after Rush was “busted” coming back into the country with a Viagra prescription not in his name (as celebrities often–legally–have for their meds) and suffered the ensuing kerfuffle, he started his next show off with, “Folks, I told my doctor I was worried about the next election!” Annnnd into the ditch I went.

Rush called the shot on Trump being able to win the 2016 election. Rush famously doesn’t get involved with nor supports candidates during the primaries. But listeners with a gimlet ear could tell as Rush’s programs unfolded before their very eyes that DJT had a real shot at both winning the nomination and defeating Hillary Clinton. Once DJT clinched the nomination, Rush was on the bow wave of telling his enormous audience, basically, “this is a guy who says what he means and means what he says.”

I think Rush’s empathy and affinity for Trump stem from the fact that he understood the slings and arrows fired at Trump probably better than anyone could. Who else had spent decades suffering non-stop lies and bilious slander by politicians and the press? Rush knew that our corrupt and effete elite rolled their eyes when talking about either Rush or his audience–you know, the people that make this country work. Rush recognized that same elitist eye-roll when DJT spoke of putting America First or the unwashed, unrefined masses that would vote in support of such a risible concept.

Since he found out that he has advanced lung cancer, Rush has defined and owned being a mensch. Knowing what he’s going through, and the fact that he still comes out and stands astride the AM EM spectrum like a Colossus is both humbling and motivating. Look, I spent the majority of my life as a professional hard guy, and I don’t think I could face the challenges Rush is facing with his calm, grace, and equanimity. It is, simply, inspirational.

Never one to put a religious slant to his program, if you listen to Rush you know he believes. The cover of the most recent edition of his monthly newsletter bears the legend God Is With Me. The Lovely and Talented Mrs. Mongo, AKA Carol Ann (one of Rush’s top ten, all-time favorite female names) read the associated article with tears streaming down her face. “What will we do when he’s gone?”

Over the years, Rush has advised his audience, “Don’t panic. I’ll tell you when it’s time to panic.” Lately, though, he has adopted a different catchphrase:

We won’t. We know how. And we have you to thank for it, brother.