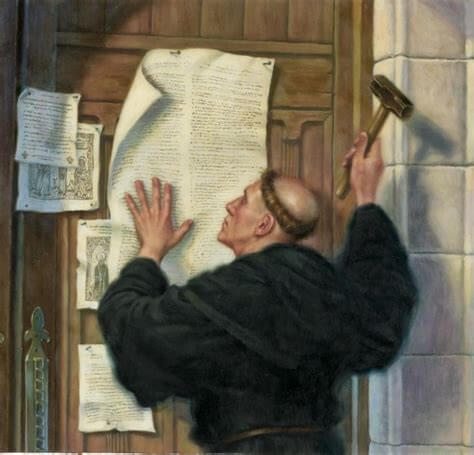 This Sunday, the Lutheran Church Missouri Synod, a confessional Lutheran church of which I am a member, that subscribes to the unaltered Augsburg Confession and the Defense of the Augsburg Confession, commemorates Reformation Day, marking the formation and break of Protestants with Roman Catholicism. Some would say we celebrate, but that is not a word I am in concord with. As when the Pope initiated the Great Schism in 1054, effectively separating the Western and Eastern churches, ostensibly over one word added by a pope to the Nicene Creed without Eastern participation or consent, Luther set in motion a cascade of revolts against a corrupt Roman Catholic majesterium that resulted in the public emergence of a passel of theological views that had lived just below the surface, often in local enclaves, for centuries.

The advent of the printing press and the inevitable explosive spread of literacy served as the kindling for the fire of theological rebellion. Local rulers soon realized their opportunity to cut the steady flow of gold from their dominions to Rome, with its brothels for clerics and a thousand traditions and pilgrimages all calculated to separate the faithful from their money. The recently completed Sistine Chapel (1508) stood as an example of a Roman white elephant built on coin drained from distant parishes, and construction on the much more ambitious Saint Peter’s Basilica was already under way. Also bear in mind that, historically, the popes held territory which they would both try to expand and be forced to defend. The Papal States were a mundane commitment that, in the most favorable construction, gave the church security rather than placing it under the thumb of mundane rulers. A fair criticism was that it served to reduce the pope’s dignity to that of one more ruler of many, lending a whiff of mundanity to the office.

The practice which Dr. Luther targeted when he posted his 95 theses on the church door in 1517 was indulgence selling. Indulgences were and are a Roman innovation where, for a monetary fee and following some ritual instructions, the Roman Catholic Church would reduce the designated beneficiary soul’s time in Purgatory. Purgatory was another Roman innovation that never penetrated to the Eastern Roman Church and was universally rejected by Protestants. Johann Tetzel, a Dominican Friar, excelled so thoroughly at terrifying the masses (literally, in mass as well as city squares) into buying indulgences that the Pope himself acted to halt Tetzel’s abuses. Indulgences are still around today, as described in Pope Paul VI’s Indulgentarium Doctrina, 1967. But I am assured by Catholic friends that the dynamic is not now as it was in Brother Tetzel’s day.

Is there a Purgatory? I do not know, and certainly do not mean to decide such an awesome question here. I do know that Jesus and Paul and John spoke frequently in scripture on Heaven and Hell without mentioning or warning their disciples of Purgatory. I commend my soul into His mighty hand and His will be done.

My point is not to shame Catholics because Tetzel was Catholic or because the Roman Church was beset by corruption and human frailty, how could it be otherwise. Nor to exalt Protestants for fracturing the church and worshipers of Jesus Christ. Protestant churches were and are also filled with fallen human beings capable of unspeakable things. The church was already fractured, Dr. Luther applied a nail to a church door and the cracks became undeniable. He became the most read man in Europe thanks to the printing press. 20% of the material published in the German language between 1500 and 1530 was written by Luther. And every ambitious churchman that could get away with it latched onto a local ruler and seized or cobbled up a theological novelty and every doctrine was challenged somewhere.

There is a lot of room for humility on both sides. Rome eventually held the Counsel of Trent, 1563, to address issues raised by Protestants and even invited Dr. Luther to attend, promising him safe passage after decades of offering a price for his head. Dr. Luther understandably declined. Rome went to Trent to close the barn doors, but the horses were long gone.

This does not mean that 16th Century Europe became the religious marketplace we see today. As I write, there is an Adventist church down the street from me, Bruton Parish Episcopal (Anglican when Jefferson and Madison attended there) Church in the Colonial Williamsburg exhibit, still an active church today, a Presbyterian Church next to a Baptist Church a few blocks away, the National Shrine to Our Lady of Walsingham, Saint Bede Catholic Church, Saint Demetrios Greek Orthodox Church, and many, many more. All denominations with their own history, their own culture, their own traditions, and their own doctrine. I can attend any or all and can donate to any, all, or none, freely, Covid and my anti-Christ governor notwithstanding. Not back in the day.

There was nothing like that in 16th Century Europe. Instead there was an officially sanctioned church, occasionally some other churches at the periphery of the domain tolerated for whatever reason or about to be quashed or already quashed with remnants meeting in houses and such. And where Jews were tolerated, some form of synagogue. If you expected to get anywhere and be someone, you got your tuchus to the right church every Sunday. In fact, it was the law. And fines were steep.

The Roman Church was often the primary legal authority on the ground depending on how land was held and population centers organized. They had their own courts, collected taxes and fees as well as tithes. The shakers and movers were lesser sons of nobles consigned to a clerical life of nominal chastity to frustrate later claims against noble estates. The Romans themselves found the vow of chastity a useful tool after early disputes over what bishop’s child should inherit a bishopric and where “church” lands held by the bishop personally. And the congregants in a parish were as much under the rule of their priests as a serf was under the rule of their noble. The slackening of the chains that bind would eventually occur, but there was a lot of argument and violence and a whole new continent to conquer on the way to making that happen.

I took part as one of four associate justices sitting with a chief justice in a mock trial at the Courthouse in Colonial Williamsburg. One of the cases was that of a man who had stopped coming to the Anglican services where he was registered, and declared his interest in attending a church under a different denomination, which was allowed for at the time in the colony. The court granted permission for the change of his registered worship congregation, and then came to the matter of fines for a month or so of failing to attend. The head judge, played by one of Williamsburg’s excellent reenactors rather than just another tourist like myself, expressed mild disdain when the four associate judges on the panel elected three to one to wave the rather stiff fines. That is a portrayal of the climate in 1774 as religious liberty was still feeling its way into American culture. We talk today of how the churches used to be full. How God-fearing we were. Whatever happened to us. It’s not the whole story, far from it, but dropping the fines had some impact, I am sure.

So yes, I commemorate Reformation Day. But I do not celebrate it. It did not begin the fissuring of His church, that had begun by the time of the First Jerusalem Council where Saint Paul contended with Saint Peter over whether gentile Christians were to be saddled with a long list of Jewish customs, but it mapped the cracks for the print age, for the world to see.

49 “I came to cast fire on the earth, and would that it were already kindled 50 I have a baptism to be baptized with, and how great is my distress until it is accomplished! 51 Do you think that I have come to give peace on earth? No, I tell you, but rather division. 52 For from now on in one house there will be five divided, three against two and two against three. 53They will be divided, father against son and son against father, mother against daughter and daughter against mother, mother-in-law against her daughter-in-law and daughter-in-law against mother-in-law.”
– Luke 12 (ESV)

I spend this day reflecting on the state of His worshippers, among all peoples and in all languages, and pray that they may firmly find themselves firmly in His mighty hand and live in the eternal peace he promises in the next world after persevering the discord of this world, as we have made it.

I am a Christian first and foremost, and I hail any man earnestly and humbly seeking to learn about and worship my Savior, the only begotten son of the living God, regardless of which fragment of His church they might embrace, and pray that He would somehow guide then and save them all, and unite us under His eternal rule. His will be done. Amen.

The peace of the Lord be with ye, always. Amen.