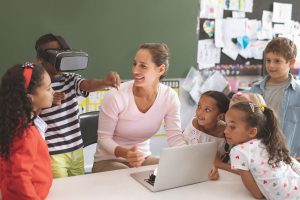 One of the few bright spots of 2020 has been the embrace of new educational options for kids. The greatest success has been the “microschool” model, where five to ten students gather in a home and receive instruction from one or more teachers. And the nation’s largest labor union is furious about it.

In a recent poll, about one-third of parents already participate in a learning pod, while over half have either joined or are looking to form one. Teachers love microschools as well, with nearly 70 percent expressing interest in teaching in one.

You would think that a group called the “National Education Association” would be thrilled that so many kids are being educated. You’d be very wrong. The NEA is primarily concerned with the money spigot flowing into traditional public schools. And if public schools bar their doors, they want every child to be left behind.

Prenda is a microschool provider in Arizona. It began in 2018 when founder Kelly Smith began teaching seven neighborhood kids. Today, there are over 400 Prenda microschools serving 3,000 students in the state. When the NEA discovered that Education Secretary Betsy DeVos might tout Prenda in a visit to Phoenix last week, they jumped to action.

Instead of adopting this innovation, the labor union created a secret “opposition report” attacking Prenda. A report that found its way into my hands. Most of the NEA’s talking points criticize microschools simply for being microschools.

Prenda policy requires that “Prescription drugs, alcohol and weapons must be locked and secured” but the NEA claims that “Although guides agree to allow unannounced home inspections at any time, it is unclear whether Prenda conducts any such inspections, or even whether any staff are assigned to provide oversight for safety compliance.” In fact, Prenda does conduct these inspections; I know because a friend of mine participated in one.

Another NEA attack is that “Prenda provides no physical space, no transportation, no Internet connectivity, and no meals.” Not having a traditional school campus is nearly the definition of microschools and the NEA knows it. The fact parents still prefer this no-frills option should concern the teachers’ union.

The NEA paradoxically blasts the teachers (known as “guides”) as both getting rich and losing money off the model. “Because most guides are in fact the parents of Prenda students, they are in effect being paid to teach their own children,” the document states. This is followed with, “Because Prenda does not provide the physical space, liability concerns and operating costs are shifted to parents.”

“We’ve partnered with schools that access state funding so that we’re able to offer it for free for the families,” Mr. Smith explains. Prenda students are registered in public schools, usually charters, which receive state funding for each pupil and then pay some of it to Prenda to handle those kids’ education. The NEA frames this as Prenda “banking on taxpayers to provide the lion’s share of its revenue.”

The NEA isn’t worried about Prenda’s failure, but about their success.