Natan Birnbaum, stage name George Burns, and Benjamin Kubelsky, stage name Jack Benny, met relatively early on in their Vaudeville careers in the ‘20s and became fast friends. Both unmarried Jewish comedians, they had started in entirely different sectors of showbiz, Jack as a serious violin player and George as a dancer. Burns found success from his pairing with Gracie Allen in 1923, the straight man to her innocent, zany young flirt (eventually wife), while Benny’s big break arrived with a guest spot on a 1932 Ed Sullivan radio broadcast. They both got radio shows that same year and supported each other through the long runs of both, inviting each other on and making frequent reference to the gags each pulled on the other. 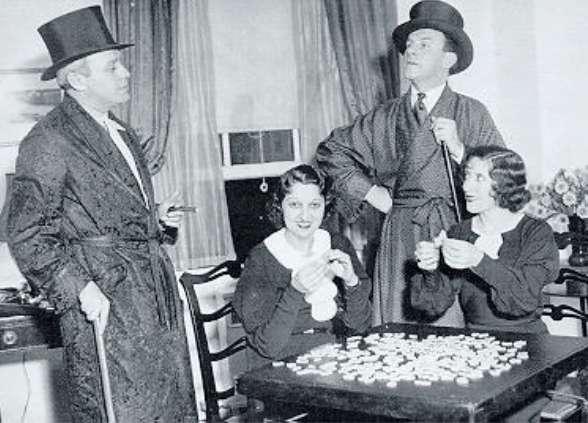 When it came time to move to Hollywood, the Burns and the Bennys bought neighboring houses, and membership to Hillcrest Country Club, the site of frequent ‘round table’ lunches with Al Jolson, Eddie Cantor, Milton Berle, Groucho Marx, and George Jessel, among others. Each found success in television in the 1950s, and while Jack was profoundly saddened, and shaken, by the death of his close friend and legendary radio rival Fred Allen in 1956, they were good years. The couples had children of similar ages whom they parented together and seemingly endless glamorous nights on the town.

For George, nights on the town and fancy cocktail parties, like almost any other time, were an opportunity to torture Jack. During one of Mary Livingstone’s very lush cocktail parties, George convinced Jack that it would be a brilliant gag for him to disappear upstairs mid-way through the fête, and reappear sans pants, wearing one of his wife’s big hats and playing the violin. Benny did just that, and while he was distracted with the endeavor, George announced what was happening to all of the party guests, and instructed them to ignore the scantily clad comedian and go on as normal. When Jack made his grand entrance and he was given no attention, and even more so when he began to move about the room playing, he was flummoxed as to why his carefully planned joke didn’t seem to amuse anyone. Until he saw a grinning George Burns. Almost on the spot, he burst out with laughter, and fell to the ground, pounding the floor with delight.

The ‘60s were an altogether tougher decade. George lost Gracie halfway through, and Jack was forced not long after to leave his beloved next-door neighbor behind, as his wife wanted the minimal maintenance of a penthouse. While he still adored Mary, Jack also began to feel in a similar position to George in terms of losing a spouse, as his wife became increasingly reclusive, often refusing to accompany him out of the house, appear on his show, or even interact with her husband face to face, never mind share a bed. Likewise, their professional lives had slowed.

Benny’s show was dropped by NBC in 1964, as the network felt the comedian had little draw for the youthful demographic they were courting, while Burns had had trouble creating any kind of successful program after his wife retired from performing in 1958. A sitcom, Wendy and Me, aired the same year that Benny was taken off of NBC, and lasted only one season. Health problems, too, began to plague the pair as the ‘60s wore into the ‘70s. 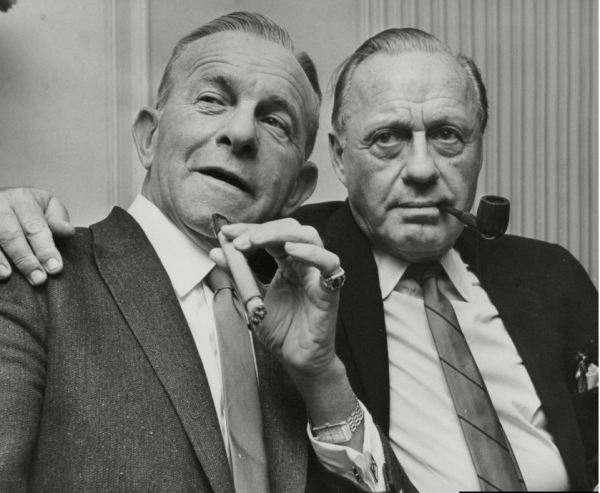 Like his wife, Burns had heart troubles, and in early 1974 he underwent a bypass operation. As he recuperated in his Hollywood home, a call came in from his best friend, touring in Dallas. Jack had been having serious stomach pain for years, but because many of his friends considered him a hypochondriac, they failed to take it seriously, chalking it up to fear of turning 80.

“‘I have a bad stomachache,’ he told me. Jack was the only person I knew who could call me after I’d had a serious heart operation to tell me how he was feeling.

“That’s too bad,’ I said, ‘I’m lying here dying and you’re complaining about a stomachache.’

‘Well,’ he said, ‘I just think I sho-’ So I hung up the phone on him. That was me, always willing to do anything for Jack to help him feel better.”

When Benny suffered a minor stroke later that day, he was forced to return to California and undergo even more extensive testing. Eventually, his physicians discovered that Jack’s pain was anything but psychosomatic. He had pancreatic cancer, far too advanced to do anything but pursue palliative measures. George’s comment on this episode was succinct, but heart-wrenching, “There’s nothing I like less than a phony hypochondriac.”

Six months of semi-sedated bed rest for Benny, who was never actually told of his condition, brought Burns to that cloudy December 26th. Against the protests of the doctors, he walked up the penthouse stairs to Jack’s room, and sat for a little while with his departed friend, crying for one of the few times in his long life. Determined to show his friend, and his friend’s family, the same kind of comfort that he had shown him a decade before, Burns was insistent that he would deliver the first eulogy of the funeral service.

“Jack was someone special to all of you, but he was so special to me…I cannot imagine my life without Jack Benny, and I will miss him so very much.”

Unable to go on, the weeping comedian, the sole remaining half of a famous partnership and one of Hollywood’s closest friendships, was helped to his seat.

Jack gave his friend one final gift, insisting that he take one of the lead roles in The Sunshine Boys, a film that he had been cast to star in before he fell ill. The film was a critical and commercial success, securing Burns’ an Academy Award for Best Supporting Actor and helping to prompt a career resurgence that lasted until his death in 1996, at the age of 100. But close friends said that, despite his newly revivified career and active personal life, Nattie never truly came to terms with his favorite hack violin player’s death.