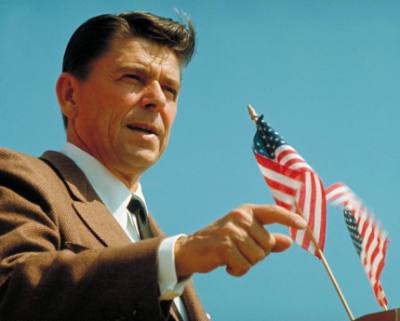 In October of 1964, Ronald Reagan presented himself to the country as a politician, giving the speech he’d been giving essentially for a decade without mention of Barry Goldwater. It’s easy for many of us to recall so many lines from The Speech. But we often forget the introduction: “I am going,” Reagan said, “to talk of controversial things. I make no apology for this.”

The Reagan Revolution began at that moment. It took twenty years, until the reelection of 1984, for his approach to governance and the world to be proven right by history. It took twenty-five for it to be memorialized by a wall that isn’t there.

Ask anyone on the right, and they’ll tell you Reagan’s Revolution ended in triumph. But now Steve Hayward tells us it ended in defeat.

Hayward is not just smart but a genuinely brilliant fellow, which is why, for the past several months, I’ve tried to put this post on the “conservative case for higher taxes” to the side and pretend it doesn’t exist, the way I do with the Star Wars prequels. (Never happened. Couldn’t happen.) But now he’s rewritten the same argument again, and I think it needs doing.

Hayward’s case is about taxes, and why he thinks conservatives should come around to the idea of raising them. But it’s about more than that, striking at the core of a disagreement about leadership and government within the right. An excerpt:

“Which brings us to the third major political fact of our age: the welfare state, or entitlement state, is here to stay. It is a central feature of modernity itself. We are simply not going back to a system of “rugged individualism” in a minimalist “night watchman” state; there is not even a plurality in favor of this position.”

“Why is it,” a Transom subscriber said, reacting to Hayward’s piece, “that anytime anyone talks about “modernizing conservatism,” they invariably mean making it more like liberalism?” I do not know, but here we are again.

Hayward is in favor of technocracy, of good government, of less but not small government. He is in favor of higher taxes to pay for this government. His argument makes perfect sense within some halcyon summer of yore where the left in America is full of reasonable people to be reasoned with face to face, like men – the days before reconciliation, before a government takeover of health care, before the left’s personal attack machine. He views this as a middle path.

What is so jarring about Hayward’s perspective is how little in common it has with leadership on the right at the grassroots level. Throughout the country at this very moment we see governors standing up for bold reforms and strongly conservative approaches which go after the bloat of government with an axe, not a scalpel – overhauling pensions, transforming education, cutting budgets in real terms not just the rate of growth. Rick Scott, Scott Walker, and John Kasich are wagering their political careers on these bold reforms having an impact and being proven right by the marketplace – following the lead of governors like Bobby Jindal who, not content to sit around, embarked on sweeping reform of government to dramatically cut the burden on the taxpayer.

Hayward’s approach runs against all of these currents. He wants a milder, gentler approach, a more sophisticated approach, not just in tone but in policy. The fight is lost. He wants to barter.

A rejection of politics as usual bartering, of course, is the reason people like Scott, Walker, Kasich and Jindal got elected in the first place. It is a rejection, in more subtle ways, of an approach to government that Republicans from Eisenhower to Nixon to Ford to H.W. to Dole to W. to McCain have all espoused (with Goldwater and Reagan as the interruptions). This dominant authority on the right dislikes bad government, and it seeks to replace it with good government, not realizing that either way ends up slowly but surely with big government – and if there’s one thing history has taught us, as the Eurozone is reminding us now, big government is always, always, bad government.

Hayward, for some odd reason, tries to make the current circumstance a failure of the Reagan Revolution. This is a head-scratching non sequitur. Since 2008 the American right has experienced an incredible reawakened revolution of limited government espoused by an engaged populist electorate which rejects the dominant establishment good government Republicans who have ruled from on high for a Coolidge-style return to the basics of what government ought to be and what it ought to cost.

On Thursday on Capitol Hill one of these new voices, Mike Lee – who trounced one of the old ones, Robert Bennett – hosted the Tea Party Debt Commission on Capitol Hill, gathering hundreds of people who paid their own way to travel from around the country and present an alternate path for the Super Committee which achieves a real balanced budget. (The Senate, for what it’s worth, kicked them out – so our friends at Hillsdale played host.) They came, as one of the citizen activists from Nevada said, because they believe it is “morally wrong to squander our children’s inheritance on the entitlements of today.” The clash with such movements within the right was inevitable – the establishment super-ego rejecting the Tea Party id – but it’s the establishment that is operating in a territory foreign to reality, where the vast gaps between what people are willing to pay and what they demand from government can still be made whole by things like Super Committees. &nbsp; How does this work in reality? Well, as George Will puts it:&nbsp;

“Born during what is mistakenly called the debt-ceiling “debacle” last summer, the supercommittee may die without sending Congress a 10-year $1.2 trillion (at least) deficit-reduction plan. This is not properly labeled a failure. Committee Democrats demanded more revenues; Republicans offered $500 billion; Democrats responded with the one-syllable distillation of liberalism: ‘More!’”&nbsp;

Hayward is not entirely wrong in his article. He’s correct that the starve-the-beast strategy of the Reagan years has been a failure. But he fails to connect any of the dots on why this is the case, missing the reality that this failure is as much an indictment of the Republican establishment as any datapoint. And his endorsement of the late Bill Niskanen’s argument (“that raising taxes may be the most effective way to reduce government spending”) is an act of severe cherrypicking in my view and Greg Mankiw’s.&nbsp; &nbsp; The growth of government is the key issue here; during the 1990s we saw the largest reduction in government spending-to-GDP since World War II (from 22.1% in 1992 to 18.4% in 2000), in part due to the tech bubble, but also due to passing on the opportunity to dramatically expand entitlements or the child tax credit even in a season of plenty. Check the steady line downward during the Clinton-Gingrich years, and check the massive explosion in spending per capita after 2000. Reach your own conclusions about who’s at fault. Annotated version here. &nbsp; At their core, most technocrats are motivated by a naive belief in the inherent goodness of men. They believe people, including politicians, will see reason and the greater good if it is only shown to them. They believe in the healing power of the chart and the graph and the illustrated trajectory of society. They believe that because they play fair, the other side will too. And they are oh so very wrong.&nbsp;

The irony here is that Hayward has lived through an argument like this before. He was a lonely voice against sweeping socialist climate change policy when the majority of Americans believed global warming was man-made, and that something had to be done to save the planet. The odds were stacked against him. Righty voice after righty voice became embarrassed at the “denial of science” within the conservative movement. I remember The Heartland Institute’s initial work to bring skeptical scientists together and the hue and cry it raised in Washington. The establishment, tired of being accosted for the views of their knotheaded base, called for peace and negotiation, modernization if you will, a deal to be struck. They bashed the “extreme right” for rejecting what must be done, what was self-evidently the only option for all rational, intelligent people. It was a moment of contrast. Joe Bast offered nothing. And Newt Gingrich sat on the couch.

Today, of course, we know what came next. The public is now at historic lows in nearly every way of assessing a belief that climate change matters. The majority, not just of Americans but of Britons, believe climate change is not man made. The skeptics won – they won with math and moral argument and a stubborn unwillingness to barter with those whose policies would’ve sentenced the third world to centuries of misery and reshaped the planet toward their anti-human ends.

This is how it was just a few short years ago. But this is how it always is now. There is no statesmanly compromise to be made on entitlement reform. The choice has to be made. We will take a path toward top-down bureaucratic rationing or we will empower the consumer to make decisions for themselves. Paul Ryan recognizes that those who see some middle path are crawling off a cliff after a mirage.

Hayward offers nothing here, ultimately, but capitulation, judgment from on high for those who stubbornly refuse to wave the white flag. How infuriating it is when people do not know they are beaten. It is time to cut our losses. It is time to make a deal. It is time to negotiate surrender. Be reasonable. But who is being reasonable here, and who is being delusional?

“They are Lucy VanPelt. We are Charlie Brown,” subscriber Laura writes. “Now imagine an honorable deal, in the form of a football.” No, they will not listen. And they should not.

You may not recall Reagan’s introduction speech in full. But these lines seem appropriate for the moment:

“They say the world has become too complex for simple answers. They are wrong. There are no easy answers, but there are simple answers. We must have the courage to do what we know is morally right.”

How simple these Tea Partiers are. How very simple. And: how right.