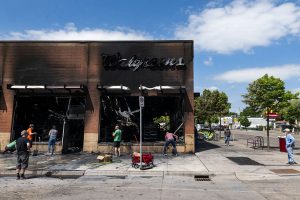 It’s an odd thing to see your city on the news night after night. I suppose those living in New York City, Washington DC, or Los Angeles hardly bat an eye at the attention, but for Minneapolis it’s been surreal. Those of us in the Twin Cities have a sort of little-brother complex – always chasing the coattails of other, bigger cities, like Chicago or New York, trying to elbow our way into relevancy. Now in the summer of 2020, we have our moment. And it’s not at all what it’s cracked up to be.

The initial riots and violence in the aftermath of George Floyd’s death engulfed the city like a blowtorch. But there is still a city here, with people struggling to survive, to pick up the pieces of their neighborhoods, to find hope in the ashes of their reality. There is a fight to save a city – once at the threshold of vibrancy and decency and opportunity – now at the edge of the morass.

Once the fires in the streets receded to smoldering embers, the national news outlets chased the rioters to the next blazing city. But when they left, other groups were quick to take advantage of our wounded city. Citizens were angry. Angry at leaders who utterly failed at everything except casting blame at each other, and of course, Trump. Angry at suffering economic ruin after months of state-mandated shutdowns, immediately followed by unopposed, violent rioters and looters. Angry at civic institutions that failed to protect lives and property. All the anger provided the perfect opportunity for groups marching under the flag of justice to step in and promised solutions – and radical change.

The City Council and the privileged class were more than willing to play that role of enablers to these violent opportunists. In 2015, a young man named Jamar Clark was killed by Minneapolis Police. In the aftermath of the event, a group called Twin Cities Coalition for Justice 4 Jamar was formed. They repeatedly protested at city council meetings, and even occupied the Minneapolis Police Department’s 4th Precinct. They used intimidation tactics over the next few years to encourage not justice and reform, but to defund and formally disband the police department. TCCJ4J is a branch of the National Alliance Against Racist and Political Repression (NAARPR), a Marxist group allied with Angela Davis and the Black Lives Matter organization. The city council, a group more interested in making sure COVID mask mandates are racially sensitive than the actual safety of the city’s streets from violence, give a platform and voice to these groups. 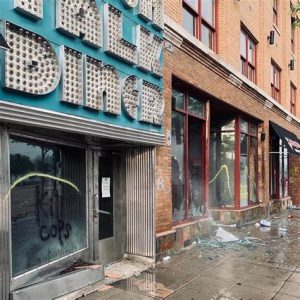 Instead of listening to the residents of the city who are directly affected by their decisions, or indecision, the city leaders cave to arbitrary rules set by intimidating mobs. They think they can trade threats of retaliation for capitulating to lawless mobs who care nothing for the individuals, families, and businesses trying to survive an urban pandemic, let alone a viral one. A state senate hearing held in the aftermath of the violence revealed the crushing blow the city’s community absorbed. Business owners cried as they detailed watching their livelihoods burn before their eyes. The husband and wife owners of the city’s iconic Town Talk Diner on Lake Street wrote on their Facebook page, “Unthinkable and surreal…Brought down by a mighty blaze, the old bright sign illuminated for the final time, in the wee hours, from the flames that surround her.” My local Walgreens, where I and many neighbors get prescriptions filled was burned to the ground.

This was just the beginning. Mayor Frey’s infamous walk of shame at the site of the George Floyd memorial on Chicago Avenue and Lake Street is a lasting image of a city in mourning, unable to move on from old wounds; it was a violent takeover by forces who would rather see it all burn to the ground than be revived in its potential glory. And so violent crime is spiking to unprecedented levels. Tuesday, the city marked its 49th homicide. The 2019 total was 48. The future looks grim for residents who are left rudderless in communities still boarded-up, graffiti-laden, and hollowed-out. The senseless crimes don’t discriminate between black and white, young and old, men and women. Earlier this month, a 12-year-old was shot while sitting in his father’s car. There was a shooting at a community prayer tent, open for people in the surrounding neighborhoods, at 3 o’clock in the afternoon. These are just two examples of the blatant street violence happening throughout the city. The Mayor’s response is to cut 100 police positions. The Governor is more concerned about maintaining his emergency powers for COVID, now stretching to September 11, than the safety of the most vulnerable neighborhoods.

But community leaders don’t care. It is now painfully obvious as Mayor Frey announced he would not fill 100 police jobs in the city. He bowed to the radical city council – the same group that has private security forces and that lives by one set of rules while subjecting the citizens to lawlessness, chaos, and despair. “There is no single policy proposal that will, in one fell swoop, undo 400 years of institutionalized racism.” With those words, the Mayor condemned another generation of Minneapolis residents to street violence and crime all in the name of anti-racist posturing. He is no leader. He is a coward and a liar and a stooge for power-grabbing, anarchy-promoting groups like BLM.

The people living here are begging to be heard, but their pleas fall on deaf ears. A Star Tribune poll released last week found the majority of black people didn’t want the police presence reduced. When a homeless shelter was announced to replace a youth activity center, neighbors rightly protested because they weren’t consulted about the change. Community groups like A Mother’s Love, Mad Dads, and We Push for Peace have started policing their own communities, mostly because they have no choice. Bob Woodson’s Woodson Center is trying to counter the violence propagated by BLM and NAARPR by giving resources to community groups that actually care about and live in these damaged communities. It will be a tough fight for the soul of Minneapolis. There are thousands who are willing to join the battle and make Minneapolis a place where the American Dream is alive, instead of the nightmare it is becoming.

If it takes destroying the city to rebuild, Minneapolis is halfway there. I hope we make it to see the other half become reality.