You can’t make progress until you let yourself sound like you. –Nathan Gunn, baritone singer 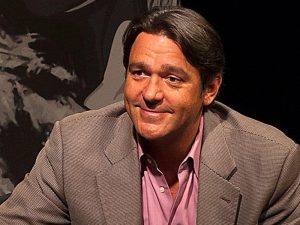 the lead role of Billy Bigelow. He performs opera and musicals, is a university professor in music and is very involved in promoting new programs. Besides having a beautiful baritone voice and his being handsome, I was curious to know more about him and found an interview of him on a program called, The Classical Life (video below). His story is in some ways typically mid-western American: 50 years old, born in Indiana, beautiful wife who is a pianist and five kids. But this quotation he made stopped me cold. It is something he tells his students.

I haven’t been a university student in a very long time, but this statement was one of those that struck me between the eyes and demanded my attention regarding my own writing. It is similar to other statements I’ve heard over the years—“Just be yourself” or “Just keep writing.” But I like the idea of being challenged and pushed beyond my comfort zone, at least some of the time. So his words called to me to parse them carefully as if there were a message hidden within them. Maybe it showed up just when I needed to hear it. Here’s what I learned:

You can’t make progress until you let yourself sound like you.

The pronoun “you” put the responsibility for my growth firmly on my own shoulders. Even at my age, I want to grow, and I can certainly seek help, but ultimately, I need to take the initiative to make that happen. Even if an opportunity just shows up, it’s up to me to actualize the results.

Then I asked myself, “What does it mean to ‘progress’? After all, where is there to go? I’m not interested in having my articles published in fancy publications. I’m not interested in becoming well-known or known for a particular genre. I think I make progress when I stretch myself in my writing; when I write on an unfamiliar topic; when I have to do research to fill in my understanding; when I write on subjects that feel risky or are controversial; when I reveal more of who I am; when I look inside to identify my own beliefs. By writing often, the process becomes more familiar, more organic as I put fingers to keys. All of these efforts stretch me and help me progress in my efforts to write in a way that is transparent, helpful, and encourages people to think through an idea.

And letting myself “sound like me” is an interesting choice of words used by Mr. Gunn. What do I “sound” like when I write? Am I willing to let myself be vulnerable? Do people have an authentic sense of who I am, what I believe, what I think is important in life? From the responses I receive from some of you, I know that I am making a contribution.

So, that’s why this quotation spoke to me. I want to feel as if I’m stretching, maturing, and growing. That people see me as clear and sincere, whether they agree with me or not. That some people believe I have something to offer.

I will continue to “let myself sound like me” as a way to grow and to be one small light in the world.

What does it mean for you to “sound like you”? Do you push yourself to grow?