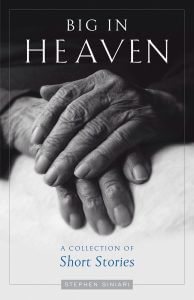 “Don’t worry, my friend, for Raskova,” she whispered to me. “I clean baby [crap]. It small thing. You sit. Read.” She said, “I am here,” tapping the pages with socket-wrench fingers. “At Dachau too, my job, priest say, sew sheets for vestment, is very small, he tell me, but big in heaven.” (p. 13)

Big in Heaven is a book of short stories, by Fr. Stephen Siniari, centered in and around the people of the fictional Saint Alexander the Whirling Dervish* parish, an ethnically Albanian church in a Fishtown neighborhood. The stories mostly follow the parish priest, Father Naum, through a variety of times, places, and narrators (some more reliable than others). The stories are not sequential. In some we find Naum young and impatient, in others, we find Naum near retirement, wiser, but bearing the scars of many years. In all of the tales, we bear witness to how the parishioners and their friends and neighbors are simply living their lives as well as they know how saints and sinners alike.

Each of the tales is a brief glimpse into the lives of the people of the parish. Through the changing voices of the narrator we learn, sometimes, of backstories and histories of the people, but not always. Sometimes the backstories are unnecessary or merely inferred. Not all of the people belong to the parish – Father Naum is friends with an Evangelical pastor, and regularly has tea with the rabbi of the synagogue across the street. The author studiously avoids common ecumenical stereotypes, however, in these interactions, and each person has his or her own voice and motivations.

The people in and around St. Alexander’s have their own voices and motivations as well. Many have borne heavy burdens and tragedies in life, while others seem to have largely skated through unscathed. Some in the community are quietly loyal, doing their jobs and raising their families, while others are out and out villains. For others, it may depend on the day or the minute. Ultimately these are the stories of who and what a priest or a pastor encounters every day if he is around long enough.

The book is not long, and it reads quickly. Fr. Siniari has proven himself an excellent writer and storyteller, and I left the book hoping he had a few more tales to tell of St. Alexander’s, and of Father Naum.

Nota Bene: Ancient Faith Publishing provided me with a copy of this book for review.

*The parish may be fictional, and the characters more or less loosely based on Fr. Siniari’s time as a priest in Philadelphia and elsewhere, but Saint Alexander the Whirling Dervish is a very real not-made-up saint. He was born in Thessalonike during the 18th century, and despite his parents’ best efforts, he converted to Islam while a teen. He made the Haaj, the pilgrimage to Mecca, and then became a dervish, a Sufi Muslim who is something akin to a wandering Islamic monk and scholar.

“It was not long, however, before his conscience began to trouble him. He found he could not tolerate the position he was in, that is, he could not stand by silently while Orthodox Christians, to whom he still felt related, were persecuted. To lighten the burden of his conscience, he began to feign insanity. While playing the role of a madman, Alexander tirelessly rebuked the Muslims for the injustices they committed against the Christians.”⁠1

Alexander would go on eventually to make a public apostasy from Islam, and for this, he was arrested, imprisoned, tortured, and eventually executed on May 26, 1794, in Smyrna.