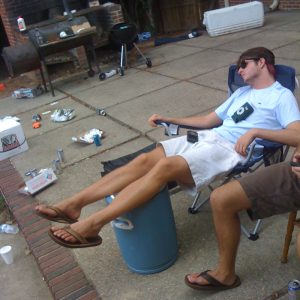 I had a good friend in college (we’ll call him “Trey”) who was one of the best natural athletes I’ve ever seen, and he was absolutely brilliant. He didn’t do sports, and he was a fifth year senior with a ‘C’ average. His Dad owned some type of factory in New York State, and Trey knew exactly where he was going when he graduated. He knew his Dad would hire him regardless of his grades, so why study? And he liked college (mainly, he liked girls), so every time he got close to graduating, he’d change his major so he could stay longer. He was an alcoholic, drinking heavily several times per week. Trey invited me to a party one night, and I said I couldn’t go. He said, “C’mon, man! It’s Friday night!” I told him I had to study. He asked why I had to study on Friday night, and I informed him that I didn’t have a guaranteed management job lined up for me, and I knew that I had one chance at a better life by going to college, and I was not about to screw it up, thank you very much. He said he didn’t understand. And he probably didn’t.

I saw a news story this morning about a group of protestors who were blocking traffic on an interstate in some city. A commuter drove his pickup through the crowd and hit one of the protestors. I watched the video. The other protestors were horrified that one of them had been seriously hurt. So here we have a group of people who stand around on the interstate and are genuinely surprised when they get hit by a car. These are people who are not accustomed to experiencing the consequences of their actions. They have a lot in common with Trey, come to think of it. They have little hope for a better tomorrow, they sense a lack of control over their future, they sink into nihilism and despair and begin to see the world as a strange, depressing place. People in this situation sometimes do things that look stupid to the rest of us. Like drinking themselves into oblivion six nights a week. Or standing around on interstates. 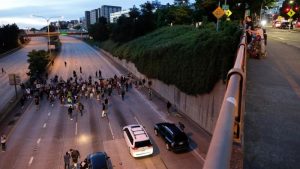 I was fascinated by the video, because most of the “protesters” on the interstate were wearing surgical masks, to protect against Coronavirus. They were being very conscientious of safety precautions against a virus which poses little to no threat to young people like them, while they stand around on an interstate, which most certainly DOES pose a threat to young people like them. When they carried the young lady off the interstate, after she’d been hit by the pickup truck, I saw someone pull her mask back up over her bloody nose.

And then many of them returned to standing around on the interstate. Remember that these people are not clinically insane. These are just people.

People are strange. I love them, but they’re strange. Of course, so am I. I cast no stones here.

But my point is that people get much more strange when they start to lose the connection between their actions and the consequences of those actions. Once someone loses that connection, it’s just hard to say what crazy stuff that person might do. 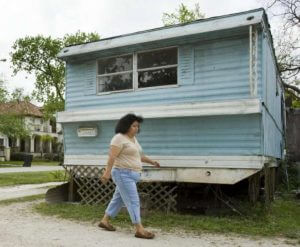 My Uncle Fred often spoke of the seen vs the unseen. Some consequences of government actions are seen (like a new bridge being built), and some are unseen (like a new business not opening, because too much money was taken out of the local economy).

People losing the connection between their actions and their consequences is an unseen consequence of too much government. A safety net that is too robust leads to erratic, self-destructive behavior. Like not studying hard in school. Or standing around on interstates.

And like Trey and the protestors, as we lose the connection between increasing the influence of government, and the many unseen consequences thereof, then we start to do stupid things with that government.

One reason to spend less money on, say, The War on Poverty, is that it doesn’t work. But I would argue that a better reason is that as we further insulate poor people from the consequences of their actions, then their actions will predictably become more erratic and self-destructive. Like Trey, who for all I know is still drunk today. Although if he’s running a factory now, as I suspect he is, then he might be sober now, which I suspect he is. The chains of responsibility that he spent his life fleeing may end up saving him.

Life is funny that way.

It’s not just the government that causes such problems. Suppose you train someone from kindergarten that the biggest threat to the world is global warming, and that they should recycle their cans. Ok, suppose one day, that person just tosses a can in the regular trash somewhere. What is the impact of that? Nothing, really.

But suppose you take a kid who just lost their farm, like me, and you give them a scholarship to college. You don’t have to tell that kid to study. Believe me, he will achieve whatever he is capable of. Because the connection between his actions and their consequences is a lot less abstract to him.

Life is not a game, to kids like that.

Trey’s Dad had protected him from the consequences of his actions for his entire life. And did Trey love him for that? No, he resented his father. I never understood why, but he hated his father. That made no sense to me at the time.

But now, watching these people with surgical masks protest against the government of the country that has given them such security that they don’t understand the danger of standing around on an interstate, I think I’m starting to understand Trey. 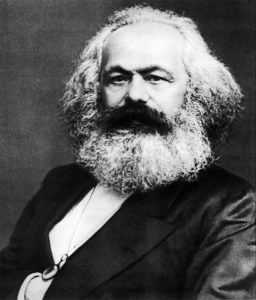 I hope he found his way. I really do.

Maybe all the wealthy kids that were sent to study with him taught Aristotle about the importance of virtue and responsibility. Aristotle felt that happiness was impossible without fulfilling one’s responsibility to others.

So Marx was half right. But the half that he missed is really important. Marx never supported himself. Never. So rather than making his world a better place, he stood around on interstates. And thus, it became impossible for his fertile mind to make the world a better place. It’s tragic, really.

By compassionately sheltering Americans from the consequences of their actions, we are making it impossible for them to make the world a better place. Quite the contrary, in fact.