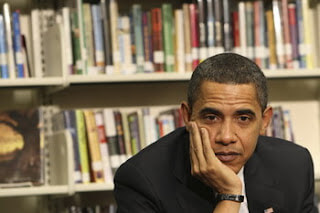 Like Mollie, I’m left a little gobsmacked by the latest communications gambit from Team Obama. Based on the early scuttlebutt surrounding the president’s speech there later today, my first thought was that somebody should dispatch mental health officials to Cleveland — because the Obama campaign is on suicide watch. Here’s how Reuters frames it:

In an economic speech on Thursday that could set the tone for months of campaigning, Obama is not likely to unveil new ideas to boost the economy and create new jobs, according to Democrats familiar with the preparations for the address.

Instead, he will make the case that he needs four more years to undo the damage left by George W. Bush, his Republican predecessor in the White House …

You know that point in a declining relationship where you can no longer work up the energy to decide what to do for the evening, so you just stay at home, watch television, and hope to avoid eye contact with your significant other? That’s where Team Obama is right now.

This is year eight ennui from an administration that’s five months away from a reelection vote. Right now, the Obama team is Tom Hanks on the raft in “Castaway” and the second term is Wilson, gently rolling away on the waves — except, rather than screaming at the top of their lungs, they’ve decided that this is a good time for a nap.

What’s the strategy here? Is this a reset speech? We’ve already had, by my count, 87 of those (to be fair, they didn’t specify which summer was going to be “Recovery Summer”). With this new speech, Obama is now officially resetting expectations more often than Harold Camping.

Do they really think their major problem is that the public’s insufficiently aware that the administration blames George W. Bush for its economic problems? If so, take it from this former White House speechwriter, Obama communications staff: there has never been a president whose problems stemmed from difficulty getting his message out. For God’s sake, George H.W. Bush made one offhanded remark at a press conference 20 years ago and hasn’t received a Christmas card from the broccoli lobby since. People listen when the president talks — except when he’s repeating himself ad nauseam to no great effect. There’s a difference between people not listening to you and people not liking what you’re saying.

And where is it written in stone that, as Obama is fond of saying, it will take a long time to get out of this mess because it took so long to get into it? Funny, that didn’t seem to be the case for Ronald Reagan or Warren Harding when they were faced with similar circumstances. But then, neither of them were Harvard Law Review, so I think we can safely assume that was dumb luck.

It’s not exactly shocking that Obama is ceasing to make a serious argument. Constrained by his ideology, he’s only ever had one bullet in the chamber on economic policy and it has now become painfully obvious that it didn’t work. What is shocking is that his campaign is going out of its way to remind people that they don’t have an argument.

Occam’s Razor would seem to dictate that this is rank incompetence from Team Obama. I guess that’s encouraging … because the other plausible alternative would be that Obama just doesn’t care anymore.