I have taken life-long satisfaction in the writings of L. M. Montgomery, a Canadian author most well known for Anne of Green Gables. Re-reading one of her collections of short stories the other day (Chronicles of Avonlea*), I came across the following quote:

Do I sleep, do I dream, do I wonder and doubt?
Is things what they seem, or is visions about?

Although I’ve read that story multiple times, for the first time I decided to hunt down the provenance of the quote.

The quote is the first line of a poem by the American poet Francis Brett Harte, known as Bret Harte. Harte was a New Yorker who moved to California in 1853 and worked a series of jobs from mining to telegraph delivery to journalist. Harte was covering for his boss, the editor of the Northern Californian newspaper in San Francisco, when the 1860 massacre of the Wiyot tribe in northern California, around Humboldt Bay, occurred. Harte published a blistering condemnation of the massacre, with explicit description of the dead, although the popular opinion of the day was different. No one was ever persecuted for the massacre, which killed women and children with knives, clubs and hatchets so as not by gunshots to notify the men, who were off performing ceremonial religious rites.

Harte fled town fearing for his life after a number of death threats for this editorial. He was able to return, and continued writing, although no longer journalism. Instead, he published some satirical works, including a poem called, “Plain Language from Truthful James,” a tale of two miners, Bill Nye and Ah Sin, cheating each other at cards. The poem was wildly popular, although annoyingly for Harte, many of its fans mistakenly thought Harte was belittling the Chinese when he was in fact satirizing the idea that the Chinese were too dumb to cheat at cards, and the poem became known as “The Heathen Chinee” from one of its lines.

The run-away popularity of this poem resulted in all sorts of knick-knacks related to it, including this ceramic pitcher produced in 1875. Note the aces falling from the sleeve of the Chinese character: 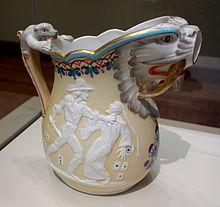 Harte returned to the narrator, Truthful James, for later works, including the 1870 poem from which my quote came, “Further Language from Truthful James.”

Do I sleep? Do I dream?
Do I wonder and doubt?
Is things what they seem?
Or is visions about?
Is our civilization a failure?
Or is the Caucasian played out?

Which expressions are strong;
Yet would feebly imply
Some account of a wrong–
Not to call it a lie–
As was worked off on William, my pardner,
And the same being W. Nye.

He came down to the Ford
On the very same day
Of that lottery drawed
By those sharps at the Bay;
And he says to me, “Truthful, how goes it?”
I replied, “It is far, far from gay;

“For the camp has gone wild
On this lottery game,
And has even beguiled
‘Injin Dick’ by the same.”
Then said Nye to me, “Injins is pizen:
But what is his number, eh, James?”

I replied, “7, 2,
9, 8, 4 is his hand;”
when he started, and drew
Out a list, which he scanned;
Then he softly went for his revolver
With language I cannot command.

Then I said, “William Nye!”
But he turned upon me
And the look in his eye
Was quite painful to see;
And he says, “You mistake; this poor Injin
I protects from such sharps as YOU be!”

I was shocked and withdrew
But I grieve to relate,
When he next met my view
Injin Dick was his mate;
And the two around town was a-lying
In a frightfully dissolute state.

Which the war dance they had
Round a tree in the Bend
Was a sight that was sad;
And it seemed that the end
Would not justify the proceedings,
As I quiet remarked to a friend.

For that Injin he fled
The next day to his band;
And we found William spread
Very loose on the strand,
With a peaceful-like smile on his features,
And a dollar greenback in his hand.

Which the same, when rolled out,
We observed with surprise,
Was what he, no doubt,
Thought the number and prize–
Them figures in red in the corner,
Which the number of notes specifies.

Was it guile, or a dream?
Is it Nye that I doubt?
Are things what they seem?
Or is visions about?
Is our civilization a failure?
Or is the Caucasian played out?

In 1877, Harte and Mark Twain collaborated on a play based on “The Heathen Chinee” intended to combat anti-Chinese sentiment, but it was not a success. Harte and Twain had a subsequent falling out, in which Twain accused Harte of insincerity, making up the dialect for his miners, and borrowing money from friends without intended to repay it. Twain referred to Harte as “The Great Bilk.” Harte’s lack of popularity in the United States led to many financial setbacks, but in the late 1870s he moved to England where his stories from the American West retained their popularity.

I’d never heard of Harte before today, but I’m glad I sussed out the background of that quote, which I’d read for years without ever possessing the mental curiosity to explore.

Thanks, Quote of the Day series for the inspiration!

* The story I was reading was “The Winning of Lucinda,” a charming story about misunderstanding and stubbornness being overcome.