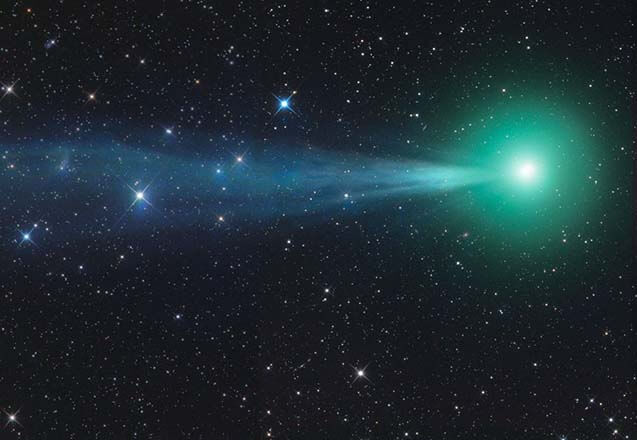 As a bonus, it’s passing near the constellation of Orion, making it easier to find, and it’ll also glide past Taurus and the Pleiades, providing for what should be some pretty photogenic scenes. It’s moving roughly north, so it gets higher all the time for Northern Hemisphere observers…

If you want to see this comet for yourself—and you do—it rises a couple of hours after sunset. For now, I suggest waiting until about 9-ish or so to look, since it will be high off the horizon then, but your kilometerage may vary. It rises earlier every day, and by early January it’ll be high up by the time it gets dark (though the nearly full Moon will make things tougher; after about Jan. 7 or so the Moon will rise late enough that it won’t be as big a problem). Sky and Telescope has excellent maps with the comet’s path on them. If you have bad weather, or just want to stay indoors, the Virtual Telescope Project will have live online viewings on Jan. 6 and Jan. 11, 2015.

It won’t be back in our neighborhood for about 14,000 yeas, so put on a warm jacket and check it out, Ricochetti.