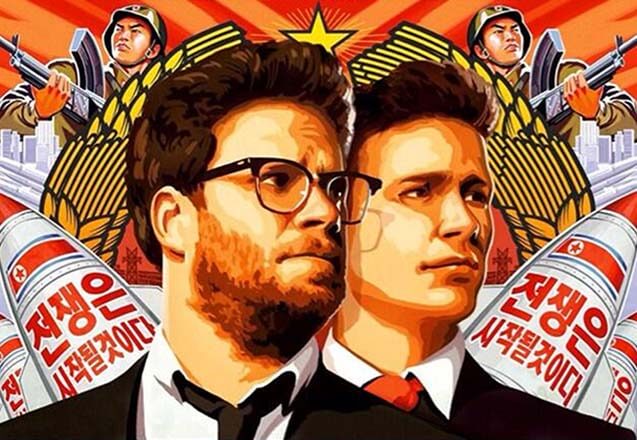 I can’t help but think of the 2003 Chris Rock movie Head of State. Chris Rock plays a Washington DC alderman who gets talked into running for President and … he wins. Thereby becoming the first black President of the United States. I saw it probably around 2004 and enjoyed it. Then I watched it again in 2010. It played … rather differently.

We don’t just watch a film in a vacuum, as with any piece of art, we view it through the lens of our time and place. A film can play one way when you see it the first time, it can play another way, often very differently, later. I know, for example, that if I were to watch Ghost Dad tonight, I would have a different reaction than if I had watched it a year ago.

So I can’t really tell about The Interview. Because of the high drama surrounding it, the Sony Pictures hacking, the threats of terrorism, Sony pulling the picture, the public reaction to Sony pulling the picture, and now it’s subsequent release to the world in a few theaters, and how I saw it: on video on demand, literally 41 minutes after it was released — it’s hard to know. The thing is, I didn’t find the movie that funny. I don’t know if it’s the movie just wasn’t funny, or if the real life drama surrounding the movie sucked the funny out of it. (Although, as I write this, in the other room my wife is watching the film, and I can hear her laughing every so often).

I knew the plot of the movie going in: James Franco plays Dave, a soft news entertainment journalist. Seth Rogen plays Aaron, his producer, who is tired of covering nonsense news, and wants to do journalism with meaning. It turns out that Kim Jong-un is a big fan of Dave’s show, and they use this to land an interview with him. The CIA finds out and they recruit them to kill Kim Jong-un. Hilarity ensues (in theory).

The problem with the film (other than it not being that funny) is that it’s not sure what it wants to be. It’s not The 40 Year Old Virgin and it’s not This Is The End, but it tries to use the similar language, over-the-top profanity, over-the-top sexual vulgarity, but at the same time there’s a seriousness and a tension. At the same time, it touches on the famines and repression of the North Korean state. But, you can’t make erection jokes and talk about concentration camps in the same movie.

Except that you can. The Book of Mormon, the Trey Parker and Matt Stone Broadway musical threads those needles. It touches on AIDS, and famine, and female genital mutilation, and can still make filthy jokes — and it works. (Their 2004 film Team America: World Police takes on Kim Jong Il, and they are merciless about it). I think the difference is that Parker and Stone set out to do a work where they confront heavy stuff head on, as opposed to The Interview where it feels like they came up with the zany concept first, then someone told them about how repressive and horrible North Korea actually is, and so they worked that in on the margins.

Considering the subject matter and the controversy, should Sony have green-lit this film in the first place? I’ll admit that film that depicts the assassination of a living foreign head of state borders on bad taste, but North Korea is a special situation. They always seem to be fair game, and that’s a business decision Sony should make. Personally, I think that borderline bad taste be damned, the whole point of art is to be provocative.

Is this a piece of art worth going to war over? That’s not a question that should be asked. Ever. The particular piece of art doesn’t matter. The principle behind it, that people should be able to express themselves free of threats of violence, is what matters. That in this case, the threats of violence came indirectly from a foreign government. The entire purpose of government is to protect the rights of its citizens. If those citizens are under threat of violence, the government should protect their rights. Period. Why the hell else have a government? In this particular situation, should we go to the mattresses with North Korea over a James Franco movie? Well, no, but there are ways to protect the rights of citizens other than war.

Should you see the film? Well, certainly if you do (and I guess this goes without saying), don’t watch it with your kids. You may enjoy the movie, you may not. Maybe when the tension surrounding it is a fading memory, it’ll get more laughs. But this movie is stupid. If you enjoyed Knocked Up or This Is The End, sure, go see this movie. More important than whether you see it is that this movie is that it’s out there, it’s been released, threats of violence couldn’t stop it. As far as this movie goes, that cork can never go back in the bottle.