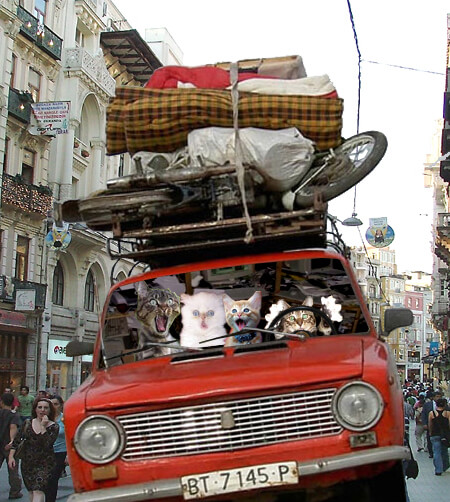 Over the past 48 hours, I have moved my entire household–including seven cats and two turtles–from one neighborhood of Istanbul to another. These two neighborhoods are not far apart as the crow flies, but very far apart if you propose to drive from Point A to Point B, seeing as the only way to do this is via Points C, D, Z and π, using the roundabout at F and avoiding the one-way turnoff to Syria.

All the cats are alive. They were all transported in a two-seater convertible and no, we didn’t put them in the trunk. By we, I mean a manly local Turkish hero and an unmanly but very sweet Iranian refugee who was in an even greater state of hysteria than the cats. (Don’t ask.)

The water in the new apartment is running. The electricity is on. And with six minutes left before the beginning of a week-long holiday, an employee of Türk Telekom came over and switched on the phone and the Internet. (There is no way that last sentence could convey the drama and improbability of this event. Think Apollo 13 meets Lawrence of Arabia meets your local DMV. Get it?)

The cellphone charger is, I think, at the bottom of one of the moving boxes, so that’s down for now. We’re out a few pieces of glassware, and one of the cats spent an unpleasant hour trapped behind the new refrigerator before I figured out where the anguished howling was coming from. But that’s nothing. It’s ten minutes to two p.m here in Istanbul, and I’m posting on Ricochet at my accustomed time. No one’s dead. All systems are go. Radio Free Istanbul is broadcasting live.

I realize this achievement will not get the coverage of the rescue of the Chilean miners or Neil Armstrong’s first steps on the moon, but if the world truly understood how unlikely it was that you’d see a post from me right now–and what a miraculous combination of teamwork, innovation, good luck, and human will to achieve the impossible this post represents–the media would be lined up three blocks deep outside my new door and the coverage of the Miracle in Istanbul would be live, 24/7, for the next month at least.

E.J. Hill, as usual, gets the photo credit and Ricochet’s eternal gratitude.