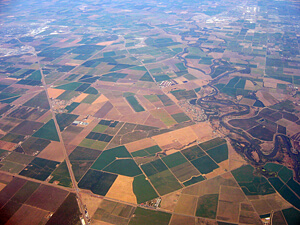 Life in the Central Valley is becoming increasingly schizophrenic. On the one hand, even with water cut-offs, overregulation, and government hostility, agriculture is booming and will have a record export year—despite the world slow-down. Food and fiber are in short supply due to world population growth, diversion of crops for ethanol, and statist mismanagement of farming abroad—at a time when years of poor prices in the state have led to vacant ground, thousands leaving agriculture, and less production. All that has combined to make California commodities more valuable to the nation (and the world) than ever before. We are coming off last year’s near-record wet year that gave us so much snowmelt that even the environmentalists could not divert all the irrigation water. The harvest was mostly free from rain; so it was a good farming year.

But there are endemic and existential problems here that are only getting worse. The Fresno Bee is running a series of articles on the Hispanic second generation high school drop-out rate in the central valley—about 60% of males simply vanish from high school. Unemployment in valley towns is about 20%. There is no manufacturing base any more to speak of: employers have fled from overregulation, high taxes, poor transportation (the 99 “freeway” is almost unchanged from the 1960s in most places), and a labor base lacking competitive skills and literacy. Prisons and government are the main big employers. To visit a valley town at about 10AM on a weekday is to see thousands of idle working-age males, as if we are one-large Home Depot parking lot with laborers milling around for day jobs.

The combination of millions arriving here from Mexico and Latin America the last thirty years without legality, English, or a high school diploma has now rippled into the second generation. Government support and education programs, unfortunately of the chauvinistic salad bowl sort, only made the situation worse—as if millions arrived in America only to be told in our schools and government programs that their destination was not all that much better than the home they so desperately had fled from. Victimization and dependency were the natural dividends. It was a tragedy of the highest order to junk the old assimilationist melting-pot model at just the moment immigration devolved from legal and measured to illegal and huge. The second- and third-generation Mexican-American middle class, which runs the valley small towns, is facing a sort of surreal experience, in suffering firsthand much of the crime and social costs of illegal immigration which it once supported in theory out of ethnic sympathy, but now in fact sees was a disaster. As a childhood friend recently put it, “I did not leave Mexico at 10 to have it come back here at 60.”

The now insolvent state had vastly expanded social programs in the last decade and now can’t pay for them, creating a strange cycle of adding millions to the social services roles and then suddenly cutting way back on the level of state support. &nbsp;The social symptoms of cold turkey cutbacks are bizarre—I lost all the copper wire in my agricultural pumps this summer after the nth break-in, and the local town has suffered a crime epidemic, losing everything from its bronze honorific plaques to its street manhole covers (and stolen no less for recycling by well-paid insider public employees!). Crime seems as if we are northern Italy around 450 amid a collapse in civilization. &nbsp;Farms out in the countryside are like gated outposts, with the realization that anything that can be taken after dark probably will be. I expect most youths who drive in my yard are there to take something—and am usually proven right. There is no confidence in local law enforcement; it targets the misdemeanors of the law-abiding that earn the county’s revenue, and ignores the felonies of the law-breakers that means untold state expense. In any case, jails are past full; and no one has any answers to how one can divert tens of thousands of youth from crime and listlessness to gainful employment. Closing the borders, returning to an assimilationist model, and encouraging vocational education are deemed illiberal. But even they would not do much without jobs—contingent on less regulation, less taxation, and better infrastructure. Often I wish that the Dean of Education at UC Berkeley, the Governor, and some Silicon Valley execs would live in Parlier, Selma, or Sanger for a year to see their abstractions reified.

This is the other California, quite a different state from the thin coastal strip from San Diego to San Francisco where the state’s elites in tourism, Hollywood, the major universities, government, and Silicon Valley enjoy the good life without the interior’s worries over rampant crime, the housing collapse, record unemployment, flight out of state, and ethnic and racial tensions. Driving from my farm outside Selma to Palo Alto each week to work at Hoover is similar to a leaving Mississippi to enter Connecticut.

Jerry Brown has few choices other than to reduce government by employee attrition. To raise sky-high income and sales taxes is to increase already massive flight out of state by the pilloried 1%; to cut back and reform government is to incur furor from his union base. Yet under Brown, huge state government of the past, prior to 2008, is slowly shrinking due to lack of funding. State workers retire, they are not replaced and the problem becomes more the retirement system’s and less Sacramento’s. California’s huge fossil fuel reserves, timber,agriculture, and mining riches, together with a wonderful climate and geography, could fuel a renaissance. In most surveys of the world’s best universities, California places at least four in the top 15, more than any other single nation except the U.S. itself. But tragically the state is controlled by a well off postmodern elite that is opposed to such development and sees no connection from tapping such natural wealth and its own affluent shell—inasmuch as it rarely ventures to the interior to witness the catastrophe it has brought on so many others so much less fortunate.

All that said, there is elemental challenge living in the valley that is not all to the bad, given the reminder that we all need to stay alert and active to the end.