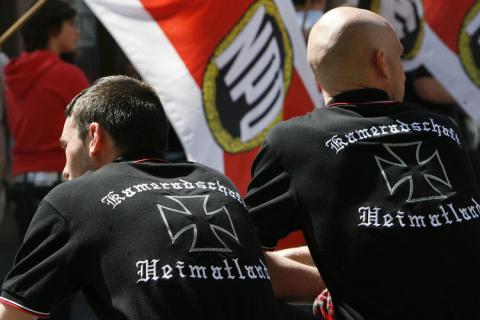 When Menace in Europe was published, no chapter provoked more hostility than the one about Germany, in which I noted that the German band Rammstein’s fascination with Third Reich imagery and dramaturgy might not be as innocent as it sounds, especially given that Third Reich imagery and dramaturgy don’t sound all that innocent. Comments like these–“Claire Berlinski is just a paranoid little Jew”–were among the more printable. In fact, the Nazis sent me more hate mail than the Islamists and the communists (and that’s when I decided to take up the martial arts, but that’s another story).

Unlike many who are keen to deny the danger of right-wing extremism in Europe, proposing instead that we focus our alarm upon the menace posed to liberal democracy by Islamic extremists, I’m a dual-direction Cassandra. Europe does indeed have a dangerous ultra-right, and by “ultra-right,” I do not mean dutiful Anglicans and devout proponents of market deregulation, I mean Nazis. Call them neo-Nazis or new Nazis if you like, but when they start killing immigrants in the name of racial purity, I see no need for that qualifier.

The so-called National Socialist Underground killed nine immigrants (eight of them Turkish, one Greek). They avoided detection for years because the police were looking in the wrong direction. What’s worse, the NSU does indeed appear to have links to Germany’s far-right NDP:

The head of Germany’s crime squad, Joerg Ziercke, said the arrest this week of a 35-year-old man in Jena in east Germany where the cell was based indicated a link to the anti-immigrant National Democratic Party (NPD).

The man was a senior NPD official in the state of Thuringia.

“I am convinced we will find further links to the NPD,” he told a news conference. “But it is up to politicians to decide what to do with the evidence found in our inquiries, that is not our job.”

Anyone who didn’t see this coming just wasn’t paying attention:

“We weren’t surprised at all,” explained Reinhard Koch, director of ARUG, an initiative based in the western city of Wolfsburg that provides counselling for young people exposed to right-wing extremism. “There have long been signs that at some point such groups would form, and not only for us–it should have been clear to the authorities too.”

On top of that, “It can’t be ruled that there are other such groups,” Koch told The Local. “Weapons caches were constantly being found in this scene or that scene–it happened so often that people stopped even wondering what these weapons were for.”

As far as Koch is concerned, the distance between the ‘ordinary’ neo-Nazi scene and the ‘hardcore’ element prepared to commit murder is very small. “You shouldn’t imagine that there are these nationalist gangs like the Kameradschaften, and then there’s a huge gap and then there’s a terrorist scene,” he said. “It all blends seamlessly together.”

Koch’s work with reformed neo-Nazis has taught him that violence permeates all parts of the extremist right-wing scene. This violence does not just take the form of drunken brawling at weekends, but disciplined training with guns administered by ex-servicemen.

“We have people in our programmes who have had weapons training themselves,” said Koch. “They were trained in western Germany, in Lower Saxony, by neo-Nazis who used to be mercenaries, for instance in the former Yugoslavia. Some were part of European training networks and got training in France or Belgium.”

The training takes place in remote country areas, sometimes privately owned, and sometimes rented for the purpose, either in an afternoon or over several days. “They often look for isolated wooded areas,” said Koch.

Dierk Borstel, researcher into right-wing extremism at the University of Bielefeld, was also unsurprised to read the recent revelations about the NSU. “We’ve known that the option of terrorism, the option of militancy, the option of murder has been discussed in the extremist right-wing scene for some time,” he told The Local.

“A few years ago there was a group based in the Potsdam area that went underground that called itself the ‘National Resistance’ who specialized in blowing up Jewish cemeteries,” he said. “We have constantly had weapons and explosives finds, but they were never taken seriously. It was simply massively underestimated. The police just thought they were little boys playing cowboys and Indians.”

The word for that is “denial.” Men who look like Nazis, call themselves Nazis, blow up Jewish cemeteries and kill Turkish shopkeepers are not little boys playing cowboys and Indians. They’re Nazis.

This problem will get worse. Anyone who doubts me on this might note that where Europe’s concerned, I’ve so far been right about everything else.