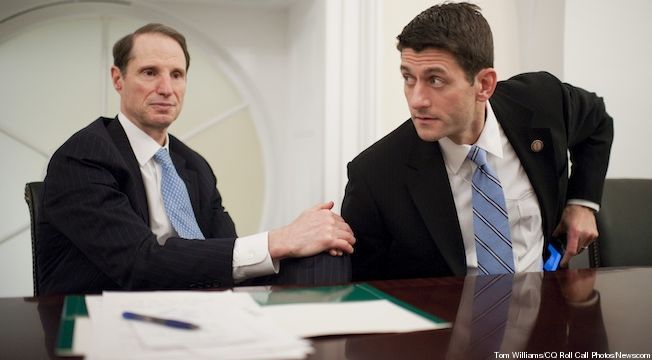 This morning, Paul Ryan and Ron Wyden announced a new Medicare reform proposal&nbsp;in the pages of the Wall Street Journal. You can read it here.

I obviously support structural reforms of entitlements. They’re absolutely necessary when it comes to ensuring our long term fiscal solvency. But I have some serious questions about this blueprint (and it is a blueprint, it’s not a bill).

There are major differences between this plan and the one which was voted for by the vast majority of Republicans in the House and in the Senate, in support of Ryan. I’ll run through eight questions for Ryan, and then share one critique – I’ve also shared all of these questions with his staff this morning, and they’ve been very responsive in the past. I’ll post any response they send me.

2. The biggest difference with your original plan is that seniors would have a choice between staying in traditional Medicare, or opting into new private plan alternatives purchased through a federally regulated exchange. You say this will “Ensure a sustainable future for Medicare.” Why do you have confidence that the conservative base will accept what is essentially doubling down on the methods of Medicare Part D? And given that this idea was also in Rivlin-Domenici, can you explain how this new plan is any better, or any more conservative, than that bipartisan approach?

3. One of the chief criticisms of the public option was that the anti-market administration/bureaucracy would inevitably game the system in order to favor the government option. In allowing the private sector to compete with traditional Medicare, won’t this happen again? Why not? The Breaux-Thomas plan involved an independent non-CMS entity to be in charge of this, but your plan puts CMS in charge of it all. Why should we not be concerned by this?

4. You anticipate that consumers will make choices to drive insurers and Medicare to be more efficient and more price conscious, driving down Medicare spending. If this doesn’t happen at below nominal GDP growth plus 1 percent, you bring Congress into the picture to “offset an increase in the cost”. Combine that with the fact that this plan retains the Independent Payment Advisory Board, and together you’re putting a lot of stock in the political courage of future elected officials. But doesn’t that create a similar problem to the “doc fix”, keeping your fingers crossed that future Congresses will act responsibly? Won’t this set up a rationing conflict where Congresses continually respond to the demands of Medicare constituents, resulting in no meaningful decrease in spending?

5. There is no means-testing of Medicare benefits in this plan, even though this idea is widely supported by Democrats and Republicans. At the moment, roughly 60,000 Medicare Part B enrollees have modified adjusted gross incomes of $1,000,000 or more. Is means-testing no longer bipartisan? Or have you moved away from it as a priority?

6. You deploy a competitive bidding model that picks the second cheapest plan. But it doesn’t appear to account in any way for market share? Couldn’t you end up with a winning premium bid which has as little as a half a percent of the marketplace? And given that this approach is largely untested, won’t such an approach lead to severe instability and churn in the marketplace?

7. Your plan includes a “free choice option” which allows some small employers to offer their employees a cash-out for their health coverage. But in your own critiques of the Fiscal Commission, you said repealing the tax exclusion would only “accelerate the expansion of Obamacare.” Doesn’t the same rule apply to employers with 100 people or fewer? Without first getting rid of Obama’s health care law, doesn’t this exacerbate the problem of employers dropping coverage and shifting people into the taxpayer subsidized exchanges?

8. A practical question: after making the case for bold reform, what is gained by moving backwards without an intervening election? How would you respond to the obvious criticism that this plan is far more modest than what Republicans courageously banded with you to support earlier this year – that it is not real entitlement reform, at least not for another decade?

Finally, I have a tactical criticism here. Wyden is a Senator viewed as an independent-minded innovator who throws ideas out to occasionally get rejected by his fellow Democrats, including the president. While the initial reaction will be negative for Wyden giving Ryan political cover for premium support, in the long game he has nothing to lose here. Ryan, on the other hand, has a lot to lose – he is a thought leader, sometimes viewed in the press as the thought leader, on budget and entitlement policy for the right… which means he gave up a lot more to do this and his movement has more impact on his party.

My concern is that Ryan’s timing and the nature of this plan will be viewed as a walkback, one that weakens the hand of Republicans going into the presidential, and creates conflict for his fellow House and Senate members who stuck their necks out to support his budget and now will be confronted by more questions.

In all, I am disappointed to read this plan. I look forward to any answers from Capitol Hill to these questions. I continue to believe that Paul Ryan is a great spokesman. Unfortunately, this is the sort of plan I’d expect to read from someone who was&nbsp;just a spokesman.