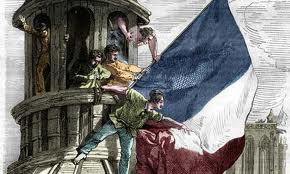 Traveling the last few days, I’ve been reading Les Miserables. There is a great deal to be said about a book so brilliant, so colossal, and so compelling, but I was struck in particular by a passage that occurs early. The Bishop of Digne, whom Hugo has already established as a remarkably holy man, a kind of latter-day St. Francis, makes a pastoral visit to an old man who had played a central role in the French Revolution.

Now the old revolutionary is dying. The Bishop attempts to prepare the dying man to meet his maker, but the revolutionary reverses the roles, submitting the bishop to a kind of revolutionary catechism instead. The Revolution involved abuses, he admits, but it proved necessary all the same:

Whatever else may be said of it, the French Revolution was the greatest step forward by mankind since the coming of Christ. It was unfinished, I agree, but still it was sublime. It released the untapped springs of society; it softened hearts, appeased, tranquillized, enlightened, and set flowing through the world the tides of civilization. It was good. The French Revolution was the anointing of humanity.

You must remember this: the Revolution had its reasons. Its fury will be absolved by the future. Its outcome is a better world. Out of its most dreadful acts there emerges an embrace for mankind ….

No longer gazing at the bishop, he summed up his thought in a few quiet words. ‘The brutalities of progress are called revolutions. When they are over we realize this: that the human race has been roughly handled, but that it has advanced.”

The bishop, who had intended to offer the sacraments to the dying man, now finds himself so deeply moved that he completes the role reversal.

‘Your blessing,’ said the bishop, and fell on his knees.

When at length the bishop raised his head there was a look of grandeur on the old man’s face. He had died.

What I found so striking is that Hugo, a widely-read and brilliant man, was of course acutely aware of the chaos the Revolution had caused–the Terror, the catastrophe of the Napoleonic Wars (Hugo’s father had served as an officer in the Peninsular War, one of Napoleon’s most brutal campaigns), the endless cycle of instability–the restoration of the Bourbons, their overthrow, the new monarchy, the July Revolution, the Revolution of 1848. Hugo knew all of this–he lived it–and yet as he composed Les Miserables during the 1850s he still proved capable of composing a passage glorifying the French Revolution. Hugo was a believer. He clung to the dream that animated the Left throughout the nineteenth and twentieth centuries–and, I believe, animates it today.

“The human race has been roughly handled, but it has advanced.” Isn’t that roughly the justification the American Left offers today? Expand government and raise taxes even if doing so diminishes economic growth. Unite the country? Nonsense. Divide it.  Treat Republicans and conservatives as enemies. Jam through vast new entitlements. Grab power. All justified in the cause of anointing humanity.

What does this mean for our side? That we need to do more than run on good government or expertise in business. Pace the Romney campaign, the ability to articulate a conservative vision–to rally Americans to the cause of liberty and the Constitution–is not optional but mandatory, as, thank God, Marco Rubio, Ted Cruz, Bobby Jindal and a few other Republican officeholders now seem to understand. When Ronald Reagan spoke of a “shining city on a hill,” in other words, he knew just what he was doing.