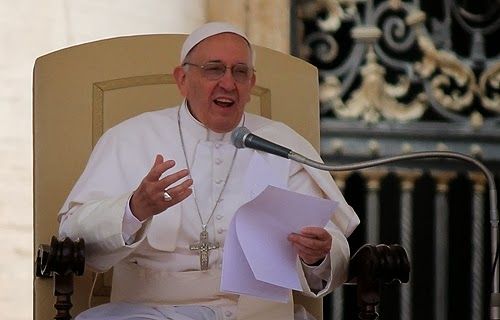 From today’s “Apostolic Exhortation,” posted, for now, without comment:

54. In this context, some people continue to defend trickle-down theories which assume that economic growth, encouraged by a free market, will inevitably succeed in bringing about greater justice and inclusiveness in the world. This opinion, which has never been confirmed by the facts, expresses a crude and naïve trust in the goodness of those wielding economic power and in the sacralized workings of the prevailing economic system. Meanwhile, the excluded are still waiting….

204. We can no longer trust in the unseen forces and the invisible hand of the market. Growth in justice requires more than economic growth, while presupposing such growth: it requires decisions, programmes, mechanisms and processes specifically geared to a better distribution of income, the creation of sources of employment and an integral promotion of the poor which goes beyond a simple welfare mentality. I am far from proposing an irresponsible populism, but the economy can no longer turn to remedies that are a new poison, such as attempting to increase profits by reducing the work force and thereby adding to the ranks of the excluded.