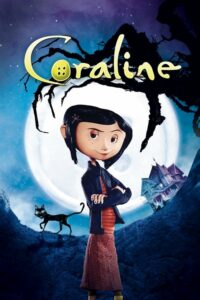 If you have yet to see Coraline I highly recommend you do so. An adolescent horror film from Focus Features and Laika Entertainment – the latter of which also created gems such as The Corpse Bride, and Paranorman – this animated film takes us on a strange journey of a young girl who is transported to a seemingly alternate world where she’s given all that she would want, but at a price. The animation style is unique for the time and just adds to the strange feel of the tale. Based on a novella by Neil Gaiman, it offers a warning for our modern times that I’m certain Gaiman would never intend, nor, I’m certain, would he in any way approve of the parallels I shall make in this commentary.

The story opens with the title character and her family moving to small-town Oregon. Coraline is clearly unhappy with the move and nonplussed with her new living conditions. The home they’ve moved to is in disrepair. Their housemates are strange and quirky at best and the only person her age is Wybie, who’s something of an annoying motormouth. Her mother doesn’t have time for her; her father is a terrible cook. Nothing is going well for her.

It’s then that Coraline discovers a small door to a crawl space that she decides to explore. Passing through it, she comes out into a parallel of her current living conditions but everything there seems perfect. There’s a nigh-lookalike of her mother who calls herself Coraline’s “Other Mother.” The Other Mother presents all that Coraline could want. She’s a good cook. Her house is clean, well-kept, and homey. Her “Other Father” is alert and clearly a clever musician. The only catch: everyone in this alternate world has buttons for eyes.

Coraline makes several trips, and each time she’s offered new delights: a Wybie who doesn’t talk, neighbors who delight and entertain. It’s all perfect, and in a final visit, her Other Mother informs Coraline that she can stay in this perfect, alternate world forever. All she has to do is let Other Mother sew buttons into Coraline’s eyes.

Of course, Coraline pauses at such an offer. At least she has sense here. But while she is “allowed” to ponder this option, she finds three bodies and is visited by three spirits of children who reveal they all took the offer of the Beldam (the Other Mother’s real identity). They were lured in by Beldam’s promises to receive all they could want and more and allowed her to sew buttons in their eyes. But they found not long after that once they agreed, the Beldam was less interested in them. Soon she bores of her “children” and eventually the children waste away under neglect, trapped in a world that promised them everything and left them to suffer.

Perhaps you’ve seen this statement. Maybe it’s popped up in your social media feed. Maybe you’ve seen pictures from a public school or similar place. It’s primarily a support message for supposed LGBTQ+ teens, especially trans individuals. The message being sent is clear: your birth parents won’t accept you for what you are, but we will. We’ll be your parents now. We’ll give you what you want. And every time I see this, I think of Gaiman’s Beldam and her offers to lure children into her world.

But are our modern-day “Other Mothers” indeed better than these teens’ birth parents? Perhaps in a handful of individual cases that might be so, but for the majority it can’t be. And in many cases, once the adolescent gives themselves over to the alternate world, they’ll find these new “parents” less than stellar. Teens can find themselves more vulnerable to predators who lay in wait in these “safe” spaces because they know these kids’ “Other Mothers” are less vigilant against the dangers than can lie there.

Indeed, there seems to be more effort in bringing young impressionable children into this world than there is in making sure said children are actually safe and protected. The results are damning; said teens are like the ghost children from the story. Husks of children who are left to suffer on their own in a world that’s more concerned with keeping them there than it is in actually caring for their needs.

Other Parents vs. Parents

In the movie, Coraline flees the Beldam and escapes back to her world. She believes herself safe from the Beldam who’s shown her true, wicked colors. However, as Coraline sleeps, she’s visited once again from the spirits of the children. She’s not safe – not yet. Indeed, the Beldam captures Coraline’s parents and keeps them separated and trapped, unable to care for their daughter. So too is it with parents today with children lured into the non-binary world. They are left in the dark as to what’s happening with their children. When trouble comes, frequently the law forcibly separates them from their children by equating refusal to support gender identity as abuse (even if they have no idea their child is doing so!)

Like the Beldam, the state bureaucrats and officials who support gender politics are loath to give up any child they’ve lured into that world. They will use everything in their bag of tricks to keep them there, not because they are particularly concerned about the well-being of said child (despite any claims otherwise) but because they know they’ll get accolades for being so supportive and strong defenders of this alternative world. Any family caught up in this web will be hard-pressed to escape, and not without scars and pain.

In the end, Coraline is able to rescue her family and defeat the Beldam – seemingly once for all. Families caught in the web of gender politics are not so lucky. Coraline is warned that no piece of the Beldam can remain for her to be safe. For American families it’s similar, but they’ve a much more expansive creature to battle and it never seems to truly be gone. I am certain that many offering “alternate parenthood” to LGBTQ+ teens do have good intentions. Unfortunately, good intentions are not the same as good parents.

The message we get from Coraline is that though the world we live in is imperfect, flawed, and often frustrating, it is still far better for us than the world that seems to offer much if we only pay a steep price to get in and remain. And I’m absolutely positive that Gaiman would protest this comparison with all his strength.