Marambaia. It’s Portuguese, specifically Brazilian slang, for a sailor who cares little for the sea. Or for a sailor who is your boyfriend, possibly other girls’ boyfriend too, in any case definitely not taking you aboard his ship. You see him only on land; and maybe that’s where he should stay. I heard the word in a song recently, and was a little dismayed it was new to me. I should have known it already. This sort of stuff is in my line.

(Speaking of lines: I think most subscribers here have one, and it’s the right one for them. They are good fits. With a certain exception. I have no way of knowing for sure, of course, but I think Ricochet doctors doctor; and the nurses nurse; and the police police; the professors profess, the writers write; and the EMTs…emerge, swiftly and with good and welcome effect. And the engineers are the kings of engines and the librarians are the queens of libraries! But Ricochet lawyers…I have my doubts. Not about all of ’em. But some of ’em. Some of ’em, I sense, really lean on their secretarial staff. For everything.)

I must confess as how I myself have no formal line at all: I’m retired, and can barely remember what it was I used to do. For the purposes of this post, I call Portuguese my line. Not sailing. Although when I took up aviation, I did wonder if sailing would be a better idea. (I’d say now that it couldn’t’ve been worse!)

I cannot think of an English equivalent for marambaia. Or for its antonym patesca, which I hadn’t ever heard of either. Neither is in my Brazilian slang dictionary, but both are in my Aurélio, which is so big I show it with a Maine Coon for scale: 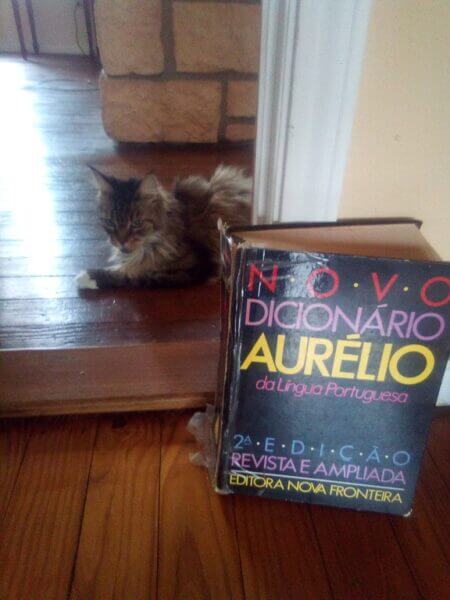 OK, a little trick with perspective there. This great volume does not actually say that one word is the antonym of the other. Within each definition, you get a Cf. for the other. (Remember, this is a Latinate language, so the familiar Latinate abbreviations are used. Not the case in Slovene or Turkish dictionaries!) Anyway, I did compare, and patesca is a sailor who loves his job so much he stays aboard when in port. And is there even an English concept for that kind of guy?

Whether you are a sailor, or a linguist, or anything, what have you learned, only recently, in your long-held line?

Published in No Dumb Questions
Tags: Be not confused, It's the Portuguese who were great seafarers, The Brazilians not even close