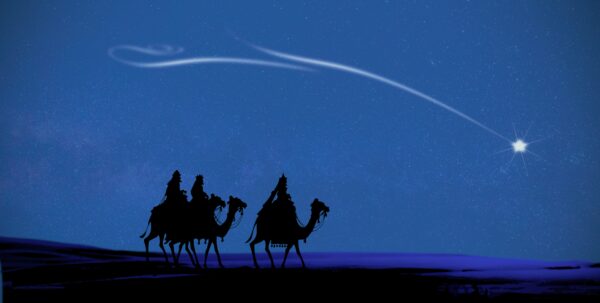 I don’t think Epiphany gets the status it deserves anymore. It never did while I was growing up. My wife, raised Catholic, remembers that decorations were up until then. Now, there is a Church tradition (as opposed to scripture) that the Wise Men showed up for Epiphany: Twelfth Night, which marks the arrival of the three wise men/kings in Bethlehem who delivered gifts to the baby Jesus. Now, I am not going to get into a theological debate here. I just have been thinking about this tradition.

See, the Wise Men, whatever their number, were not Jews. They were not even Romans. They were from outside the “civilized” world to the East. Here they come to offer homage to the “King of the Jews.” What on earth would three Zoroastrians (or whatever) being doing that for? They had to pass up other, greater earthly kings to get there. Even acknowledging the divinity of Christ, why worship a King of the Jews, the Son of the Jewish God? It seems strange to me.

It is seeming to me the whole point of this story is that Christ really did come for everyone. He did not come for just the Jews, but for all Mankind. Christ comes to Earth for all of us. I have always liked this final lines of one of my favorite Christmas hymns:

Mild He lays His glory by
Born that man no more may die
Born to raise the sons of earth
Born to give them second birth
Hark! The herald angels sing
“Glory to the newborn King!”