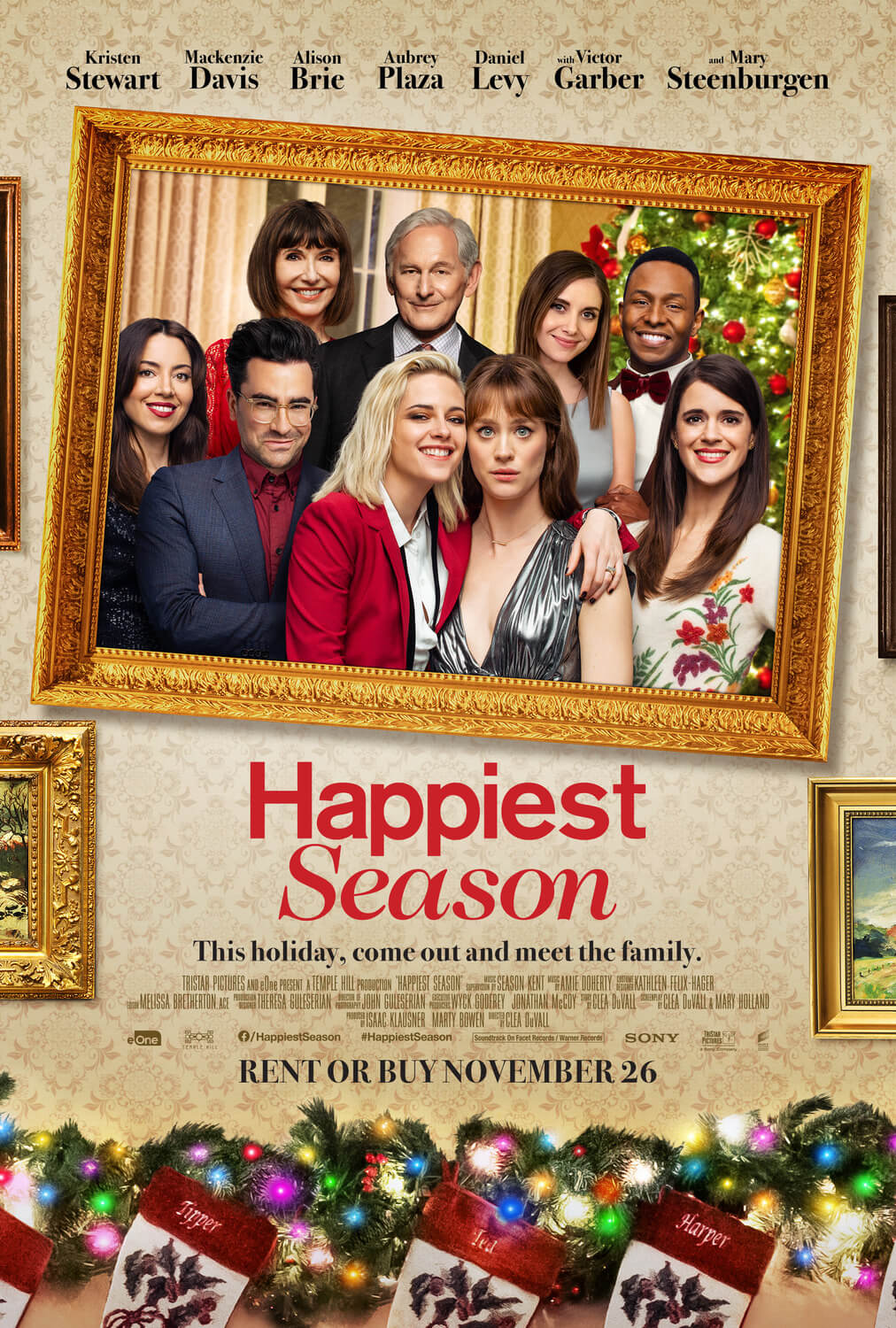 Harper Caldwell (Mackenzie Davis) takes her girlfriend Abigail Holland (Kristen Stewart) to spend the holidays with her family. Abigail is the name of a concept album from King Diamond, which itself inspired the name of a sex-crazed black metal band from Japan. That has nothing to do with the movie, forgive me. Besides, they call her Abby 99% of the time. Tension arises when Harper reveals her family doesn’t know she’s a lesbian and Abby will have to pose as her roommate until Harper feels comfortable coming out.

Hiding their relationship leads to what doesn’t rise to the level of antics, but is still well outside recognizable human behavior. There are the routine misunderstandings, awkward dinners, and close calls. The one interesting detail of the plot is that Harper’s parents aren’t bible-thumpers. Her father (Victor Garber) is running for mayor, and though his speeches include vague references to “family values,” Harper’s reluctance is due to fear of hindering his campaign rather than offending his moral convictions. When everything inevitably comes out, it turns out Harper’s two sisters also feel stifled by their father’s insistence on projecting an image of a perfect family. It’s about overbearing parenting rather than bigotry.

That doesn’t let the movie off the hook. A parent you were justifiably worried about coming out to wouldn’t have a change of heart overnight. The audience for Happiest Season wouldn’t have it another way. They’re the type to make sure romance stories have the HEA tag before jumping in. They want a cozy visit to a world where any relationship can be mended with a heartfelt speech. You may question then why I chose to watch this. I have no one to blame except myself, since the trailer was clear about what was in store. My judgment was clouded by the fact that not only does Kristen Stewart play a lesbian, but so does Aubrey Plaza. There was a chance the movie could save me the trouble of writing a hot fan fiction. 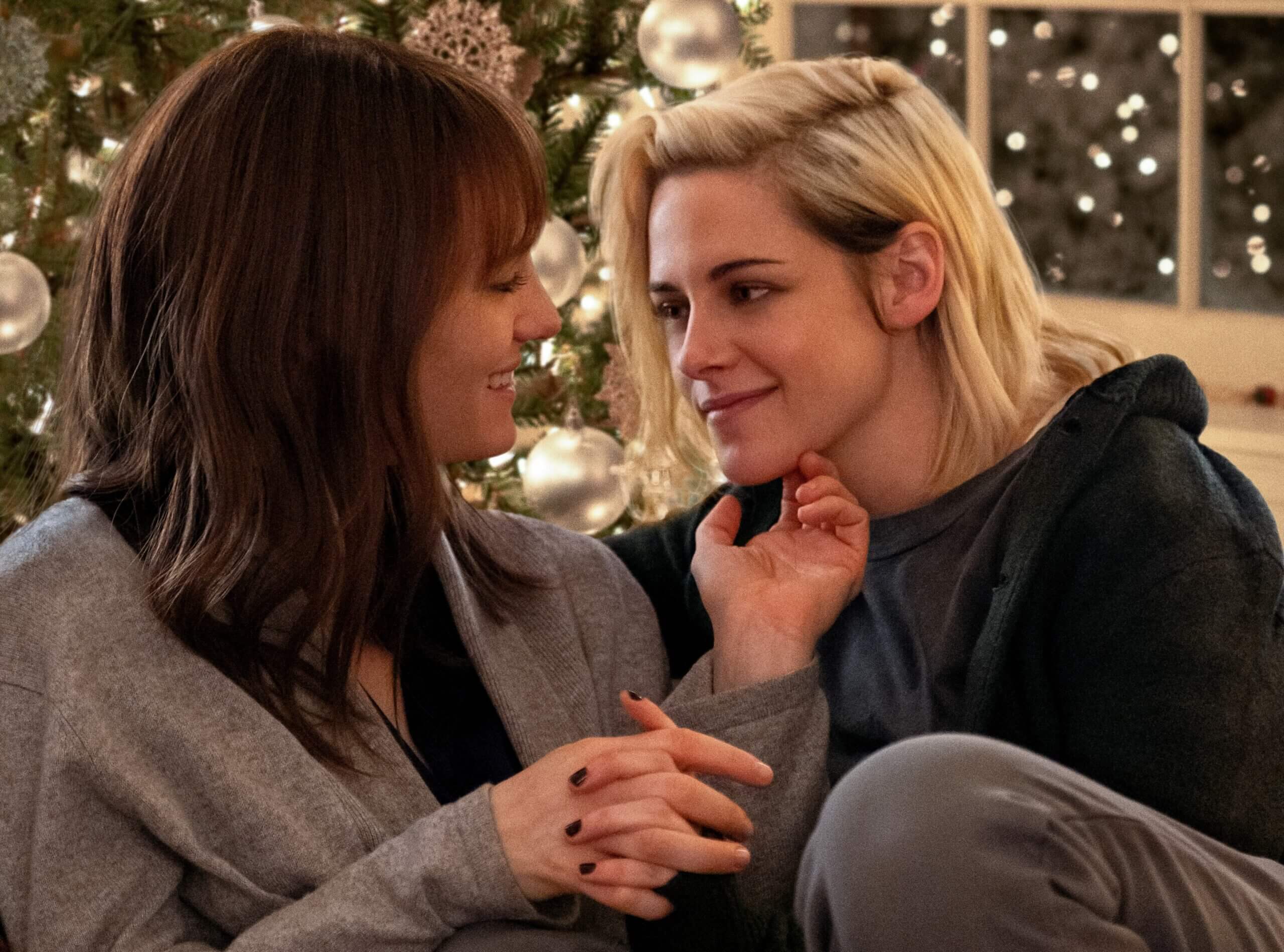 If you have an interest in the movie as base and particular as mine, don’t bother. Though their scenes are not sexy, Stewart and Plaza deserve a tip of the hat for their chemistry. Plaza plays Riley Johnson, an ex of Harper’s who has a thing for Abby. Abby and Riley’s unfulfilled romance is the most grounded part of the movie. There seems to be a genuine attraction between the two, both portrayed by actresses known for their reserved personae. Stewart gets called a bad actress by people who confuse acting with emoting, who’ve never met a quiet person, who didn’t understand who Twilight appealed to and why.

The cast is filled with actors working harder than the material merits. Alison Brie plays Harper’s sister Sloane with such unblinking severity she’s near unrecognizable. She’s the type of high-strung, uptight mega-mom whose beauty is too regimented to be attractive. Mary Holland plays Harper’s other sister, Jane, a daft wannabe fantasy writer who would be a fun character in a better movie. Dan Levy plays the stock gay friend with prancing flamboyance. He harangues Abby for the first half of the movie, but when given decent material, he delivers the movie’s few funny lines. Mackenzie Davis is tall.

We’re long past the time when gay movies were issue movies with very important messages. Gays are no longer relegated to indie dramas. It’s full integration. Now they get to make bad movies too. A defense of Happiest Season would be that it’s inoffensive, which is true. Even content-wise this barely earns its PG-13 (they don’t even use their one F-bomb). If you just want a nice time where you can imagine having your own gay bestie who says the right thing when you most need it, then have at it, I guess, but I can’t recommend spending 100 minutes watching Kristen Stewart and Aubrey Plaza not make out.