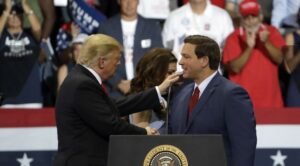 Hopefully, some will interrupt the wailing and gnashing of teeth for a moment and give thought to what election blues should tell us and what a reasonable course is. I fear some have forgotten the real fight we are engaged in has always been eternal and constant; always will be. There is no such thing as complete victory until a higher power than mere human politics decides to call the game. Disappointments are engrained into such struggles, just as victories only present new challenges. Don’t worry, I will probably have a couple of worn coaching slogans to bore you with later, if you last that long. But nothing – and I mean nothing – was achieved in comfort.

We actually have several things to celebrate at the moment, even if our path now seems harder than it was just a few days before. What November 8, and the few senseless days it takes to actually confirm results, should do is clarify the principles which we are committed to and the new steps that we will take going forward. The principles of Liberty and the moral order necessary for it to flourish are what will point us toward the nation we envision. That vision is a grassroots one and it will live, die or flounder on the “everyday” citizen’s belief in it, as well as their focus on it.

Let’s take a minute to look at just some of the things we should know after this election.

The GOP will have control of the House. True, maybe just barely. But they now have the power of the purse. They need to be encouraged to use it. The race for the House was not a disaster at all despite its failure to meet the over-the-top predictions. A great many of the battles against incumbents were lost by less than 5%. Believe me, I know a loss is a loss. I got hired and fired on such things. But beating an incumbent is a big uphill fight and it has been shown that it can be won.

I still believe the GOP will end up with a majority in the Senate. Maybe not, it is a close call and will take at least a good run-off. But the worst will the same situation in the Senate. And if Tshibaka ends up being the senator from Alaska, that is as good as a flip as far as I’m concerned.

Even more, progress has been made at the state and local levels, which I still contend is where the battle will be won or lost long term. State courts in several important states will now have a conservative flavor. Kansas, for instance, will seat four conservative judges giving them a strong majority despite the Dem governor. School boards and legislatures are now much more conservative. It is from them that some 2024 and 2026 candidates will come.

Remember, if not for the 17th Amendment, Republicans would have 60 senators selected by the GOP legislatures. There will now be at least 31 GOP legislatures, just three shy of the number needed to call a Convention of the States. Nineteen have already voted to do so.

We had more citizens-candidates than ever. That is a good thing. It does not sit well with the establishment types and the “bi-partisan” Republicans among us.

The GOP has a genuine opportunity to become the party of the working/producing class of this country. The establishment and party elites have always been able to keep that from happening in the past and will try and block it if they can. Oh, they don’t mind having their votes. They just don’t want them picking candidates or setting agendas. And yes, that does mean that the so-called MAGA are at the core of the party – if it is to be a governing party. That does not necessarily mean Trump is along for the ride, but it certainly doesn’t exclude him. I will get back to that later. But these people are the same core of the Reagan revolution, the 1994 take-over of the House, and the Tea Party. Their principles are the same, theirs hasn’t changed. They have wanted a voice and seat at the table instead of the traditional pat on the head from a McCain, Romney, Bush, or McConnell.

We know that good elections can be conducted. It is proven by states like Florida, Texas, and Georgia, to name a few. Yes, there are still corrupted practices in several. But 2020 has created a determined effort toward better practice and it is taking hold. More local and state officeholders are the foundation of more secure election practices. Of course, not as fast or completely as I would like. But that will probably always be the case.

The places where strong leadership kept states from falling under the COVID restrictions farce saw strong GOP returns. The lesson is that good, conservative governance is what is needed, not middle-of-the-road wind sniffing. It will reap rewards for both the citizens and the candidates. There the GOP actually governs as conservatives, they will do well.

That does not mean you win every election. Yes, there are some things more important than just having an “R” in a seat. The quality of that “R” is important.

The battle for Liberty will not be won fully until the culture war is fought and won. That also should be clear. Those who took these issues on head first did well. That does not mean every election will be won. The cultural rot is deep and party elites have walked around it for too long. The deeper it is, the less chance Liberty and the moral order have.

Abortion probably did cost some votes this Tuesday. But there are some issues where it is more important to be right on. Dobbs certainly cost the GOP some votes and maybe a seat or two. But there are also babies in some states who have been given a chance at the life they are entitled to. And both science and reason are on the side of the baby. It should not be a burden to defend a just cause and win it one vote at a time, even an election or two, or lost along the way. It is the final outcome that will matter when all the races of all the election years are totaled up in a time of accounting.

There is much to look at with so many emotions flying about. One realization should be that this is a time for reflection, for making solid our direction and our purpose.

I believe in eternal principles. I believe in the ability and capacity of moral people to chart their own paths. We were not made to be ruled. We were made by a divine hand to rule our own lives within a moral order passed to us. What I do not believe in is secular savor princes. And I hear (and read) a lot of that today.

I do believe that most major changes for the good are brought to us by the outliers. I do not “do” politics because I like it. It is a necessary evil normally done and enjoyed by small people playing big with other’s lives to feed their own needs or sensations. Liberty is my political goal, if I have one. Politics is a vehicle through which we can secure and protect Liberty. Otherwise, it is a silly distraction from real, more meaningful life. It also too often, most often, shapes the course of history, which I do value because of what it tells us about ourselves and what we should be, can be.

DeSantis may well be our next presidential candidate. But he may not. There is much to be played out over the next two years. There are several individuals who may present themselves. And yes, Trump may even be in the mix.

I am open to the concept that Trump may have had his time but I can promise you that we would not be where we are, with the opportunities we have without a Trump who fought as no one had before, who took more undeserved, falsely conceived abuse than any public figure probably in our history, who showed the complete incompetence of the establishment and commercial political class and took on a media which has happily led our culture toward damnation.

I started with a plain dislike for the man because of his handling of a football league that cost me a job, shook my head at his rhetoric while noting that everything he said was the truth (except his own brags), wished for him to tone some things down and voted for him feeling if he kept his word he would be ok but doubted he would.

I judge you not by where you come from, how unpleasant I considered you to be, or even if I can stand to be around you. I judge you by how you play on the field, how relentless you are, how determined you are, and how focused you are on the valid outcome. Trump played like a lion and he moved the ball for all of us, if we know it, or appreciate it. Perhaps his tendency to shoot his own foot will catch up to him. Maybe it already has. But his administration was the most important of our lifetime. Yes, I know who else that includes. Perhaps that will be his legacy without another chapter. We all play our last game, for a lot of reasons. And some play one season too many. All the petty little rail sitters need to save their breath. There are some things that demand respect.

Trump is not my prince. And neither is DeSantis. I intend to win, with either of them or without any of them. If we succeed in keeping Liberty, it will be because of us. It will be because we were a people willing to confront the evil among us, to protect the most innocent, to demand accountability, to refuse compliance to authoritarianism, to insist on the practice of our natural rights and build families, communities, and nations around an eternal moral standard. If we are undeserving, Liberty will be lost. Yes, free will is centered on choices and their natural results.

Now is the time to simply be who we are supposed to be. Act out our citizenship as a free and determined people should. And “let the game come to us.” There will be plenty of political games played in the meantime. “Waves” are not the norm, but when they happen, it is usually because of the steady, determined work that produces a step-by-step progression. If a wave happens, it happens. But keep moving toward the final goal regardless of the time needed. We are well-positioned to do just that.

The right outliers will present themselves, maybe without realizing it. The schemes of the princes and their promoters will eventually show themselves for what they are. The most important element of our success will not be them, it will still be us.

The American Revolution was won by the third that believed in it and was relentless and purposeful in keeping it alive regardless of what the other two-thirds did or how much they wavered back and forth. They believed and they lasted.