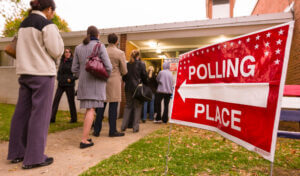 Here’s my report: Even though we have been Early Voting for two weeks in Miami-Dade County, FL, there was a line to get into the library to vote. I have not ever seen a line to vote at this location before during early voting.

Another first (for me). At the location where I voted, every time a voter was identified as a “first timer,” a poll worker would shout, “first-time voter!” and all the poll workers would take a second to smile and applaud for the voter. One of the times when they were clapping, a person standing near me made a small mouth noise that sounded something like a quiet scoff.

Without looking at him directly, I smiled and said something similar to, “This is a very big important event in that person’s life. One takes great pride in voting here. This is the United States of America. Recognition of importance of voting is a good thing.” He gave a small nod.

I think the precinct worker guiding the voters in my line heard me because, a second or two later when I reached the front of the line, the woman whispered “But the country is different, it’s changed too much.” I quietly replied, “I know. WE need to take it back. And, that’s what we are here to do.” She nodded quite enthusiastically in response.

I was so surprised.  I live in a very blue county in Florida. Never seen anything like this before.

Have you voted? If so, please share your experience.

Published in Elections
Tags: I Voted