“The church is not partisan. The Catholic Church is probably a great example of a church that offends both Democrats and Republicans alike.” – – Rev. David Boettner, rector of the cathedral and vicar general of the Diocese of Knoxville, Tennessee. 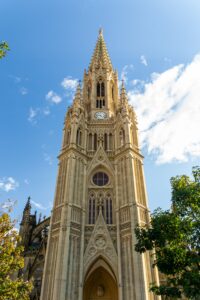 My heart goes out to all those church and synagogue leaders who try to lead their communities and congregations with integrity and honor. Too often, some of them go far beyond the content that they should be sharing with their members. What drives a religious leader to indulge (and I do mean to use that word) in spreading political positions? Have they considered the implications of acting in this way? I’ve come to my own conclusions.

First, I think there are some leaders who are simply zealots, which I think primarily describes the far Left. They think they are correct in their beliefs, and those people who believe otherwise are terribly misguided at best, or evil at worst. These are the spiritual leaders who are supposed to bring their members to a closer relationship with G-d and each other, but they are certain to offend at least a percentage of their community that believes that church sermons should be politics-free or shouldn’t denigrate their own political views. Preaching politics from the pulpit is arrogant, thoughtless, and inconsiderate; if a religious leader can’t keep his views to himself, he doesn’t belong at the pulpit.

Another reason for religious leaders preaching politics is because they don’t know how to clarify for themselves and their community the reasons for not speaking on politics, but they are also afraid to be disliked or rejected (particularly if a group within the community disagrees with their positions). One aspect of being a religious leader (it would seem to me) is to demonstrate courage in the face of adversity. That means that you may preach on inclusiveness and tolerance, but you won’t voice a political agenda.

There is also the issue of people who want their religious leader to take a public position on politics; in other words, they are trying to coerce them to “speak to their side.” Religious leaders are certainly entitled to their own views, but they are out of line to take public positions on specific political ideas. If their congregants reject that decision to remain neutral, they can simply look for a new church.

Another issue is that people say they want their pastor to help them relate the bible to their own lives. An excellent way to do this is for the pastor not to list off a palette of views, but instead to ask questions of his members, explaining that it is their challenge and responsibility to answer those questions for themselves, as they relate their lives to the words of the Bible.

There are other rationales we can give for preaching politics, and I encourage you to list them in your comments. But I think it’s also helpful to look at the restrictions that the Internal Revenue Service has enacted:

What political activities are prohibited under the Internal Revenue Code?

Must religious organizations restrict their discussion of issues during election campaign periods?

No. The political campaign intervention prohibition does not restrict discussions of issues that are not linked to support for or opposition to candidates. The fact that candidates may align themselves on one side or another of an issue does not restrict the ability of religious organizations to engage in discussions of that issue. That said, a religious organization may nonetheless violate the political campaign intervention prohibition if it communicates preferences for or against particular candidates as part of its issue discussions.

What is the likelihood that a religious leader will be able to be objective, and not take sides, in these types of discussions? Why allow for discussions that are not faith-related and are likely to create conflict within the community?

What conclusions do you draw from these thoughts I’ve shared?

My advice: don’t preach politics from the pulpit.