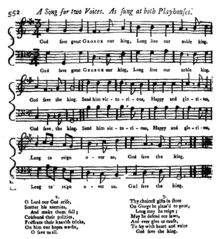 Two hundred seventy-seven years ago, on September 28, 1745, the still relatively new kingdom of Great Britain was in disarray. The perfidious Scots (I think understanding a writer’s point-of-view is important, so I always try to make mine clear from the start) were in rebellion (again) and the Stuarts, in the person of Bonnie Prince Charlie (at best a vain and difficult man; at worst, perhaps, a coward and a despot) were revolting (again). George II’s reign was thought to be in jeopardy, banks and stocks were failing, and the country was in need of a symbol to unite it.

That evening, at Drury Lane theater, immediately following (best evidence seems to indicate), a performance of Ben Jonson’s play, The Alchemist, the cast and orchestra appeared on stage to sing an anti-Jacobite song written by the well-known composer Thomas Arne. The tune was borrowed from a number of traditional melodies and was mildly stirring,* but it was the words that captured the imagination of the audience:

(There are some variations to the reported lyrics. However, they stand for the most part, with the elimination of prayers for a specific monarch, to this day.)

were agreeably surpriz’d by the Gentlemen belonging to that House performing the Anthem of God save our noble King. The universal Applause it met with, being encored with repeated Huzzas, sufficiently denoted in how just an Abhorrence they hold the arbitrary Schemes of our invidious Enemies, and detest the despotick Attempts of Papal Power.’

Subsequent to the final defeat of the Scots (pace Nicola Sturgeon) at the Battle of Culloden in April of 1746, “God Save the King” became the de facto national anthem, and gradually evolved from the celebration of an individual monarch to a song of praise and solidarity on behalf of the nation.

And thus, it remains.

So, who is this King (or Queen) of Great Britain of whom I speak?

In these early years of the third decade of the twenty-first century, he (or she) is a constitutional monarch who reigns with the support of the majority of the British people. There are, no doubt, republicans in that mix; that’s baked into the cake. And–as has been the case for a thousand years–some monarchs are more popular than others.

Although it’s certainly true that the death of Elizabeth the Dutiful, the Steadfast, the Beloved, the Faithful, has brought on a welcome hiatus (for the most part) when it comes to bashing Charles Philip Arthur George, the former Prince of Wales and now King Charles III, I daresay it won’t be long until we’re doubting again.

We shouldn’t doubt. Great Britain has survived far worse monarchs than Charles III is likely to be, and will probably survive more of them in the future.

Here is what the British Monarchist League has to say about it:

A constitutional monarchy is a form of government in which a monarch acts as head of state within the parameters of a written (i.e., codified), unwritten (i.e., uncodified) or blended constitution. It differs from absolute monarchy in that an absolute monarch serves as the sole source of political power in the state and is not legally bound by any constitution. Most constitutional monarchies employ a parliamentary system in which the Monarch may have strictly Ceremonial duties or may have Reserve Powers, depending on the constitution. They have a directly or indirectly elected prime minister who is the head of government, and exercises effective political power.

As in most republics, a constitutional monarchy’s executive authority is vested in the head of state. Today constitutional monarchy is almost always combined with representative democracy, and represents (as a theory of civics) a compromise between total trust in the political class, and in well-bred and well-trained monarchs raised for the role from birth. Though the king or queen may be regarded as the government’s symbolic head, it is the Prime Minister who actually governs the country.

I hear and see some of you jumping up and down and asserting that Britain doesn’t have a constitution, so how can all of that (as marvelous as it sounds) possibly be true?

Actually, Britain does have a constitution. It’s often called an “uncodified” one, but, really, it’s codified in hundreds, maybe thousands, of legal and parliamentary decisions over hundreds of years, going back to at least 1215, when the whole idea of “divine right of kings” (finally expunged forever, somewhere in the late-eighteenth century) took a substantial hit. Ever since then, with increasing frequency and attention to detail, the idea that the monarchy and the people’s elected representatives must find a way to rub along amicably has been paramount.

I’ve shown my hand here lately in a few posts, so you know where I stand. And I think one of the most cogent comments on one of my posts WRT why the idea of a constitutional monarchy actually works in the UK was one which stated that the assumption that such a system might work depends on the “decency” of both sides–the elected and the inherited–and in their honoring long-standing tradition. (It may have been my resurgent friend @bdb who made that comment somewhere; I’m not sure. If it wasn’t he, please show yourself, because it’s spectacularly on-point.)

Here’s a post by a man who’s regularly celebrated by the American Right: Daniel Hannan, titled “It’s no coincidence that the most successful democracies are constitutional monarchies. A monarchy is there to legitimise the government and to forestall the possibility of civil war.” Unfortunately, it’s on The Telegraph website, which has a paywall.

All of them are from outside the Commonwealth, and the vast majority from republics. Many of the people sending them, especially the Americans, see the repudiation of monarchy as an important part of their own identity. One friend, an old-fashioned lefty from Vermont, was typical: “Even I, a resolute republican, am an admirer of how Elizabeth conducted herself in her anachronistic role. My condolences.”

Americans tend to profess admiration for the woman who wore the crown rather than for the crown itself, much as one might admire the Dalai Lama without being a Buddhist. Yet, the more you think about it, the harder it is to separate the office-holder from the office. Had Elizabeth Windsor had the baby brother she used to pray for as a girl, she would doubtless have lived a blameless life of rural domesticity. The virtues that the world admired in her – discretion, dignity and, above all, duty – were admirable precisely because they were the virtues of a head of state.

Indeed. If you can find a way to read the whole thing, please do.

When Elizabeth II died (I was named after her, having been born just several months after she was crowned), I found myself far more affected than I thought I’d be. After all–for God’s sake–I’ve lived in the United States almost (but not quite) continuously since 1963. I love this country, these United States.

I recollect that–since 1066 and the day–almost exactly 956 years ago–on which the Norman, William the Bastard, defeated the Anglo-Saxon King, Harold Godwinson, there have been just 42 British monarchs.

I live in a country in which there have been 46 presidencies, and 45 individual presidents (due to good old what’s-his-name; oh–that’s right–Grover Cleveland) over the past 233 years. There is absolutely nothing wrong with that.

My point is that–perhaps–the continuity over the decades and centuries–of a monarchical tradition may have some soft benefits.

Crimenutely. I’m 68 years old. I’ve never (until a couple of weeks ago) known a Great Britain with a monarch other than Queen Elizabeth.

So, when she died, I found myself remembering:

My childhood. My boarding school.  My own allegiances. My parents. Nigeria. The colonies. My father’s and my mother’s encounters with the Queen in the 1950s and the 1960s. My grandmother and her “Queen Elizabeth” roses, not to mention her “Coronation” silver teaspoons. World War II. My great-grandmother (born in 1869, died in 1968) and her devotion to the Queen. Auntie Betty.  Maudie Nichols. All my life.

I feel so connected to all this history.

And I think about how this sort of thing works in republics, whose “heads of state” have fixed, short terms to their prominence.

Perhaps, when Jimmy Carter dies (he’s a year or so older than the Queen was. Wishing him good health, but let’s get real): What will we say?

I’m guessing something like: “Who, he?” Yeah. Fifty years ago or so, he may have been important. But since then? Ummm. No. Crickets.”

Jimmy Carter (whose presidency I remember vividly) didn’t form a part of my life.

Queen Elizabeth did. Because she was there for the whole of it.

And, as Robert Frost said in a somewhat different context, “That has made all the difference.”

Perhaps there is something to be said for a model of government for the humans who comprise the nation it’s focused on–umm–that the model itself should focus on a human who represents that nation.

To conclude, I’ll link to the video (which I’ve linked to before) of the changing of the guard at Buckingham Palace, just after 9/11.  (See brief discussion of “decency” above.)  I think this–more than anything else I can bring up here–makes that point:

God Save the King!

*This page contains much in the way of interesting history, which is beyond the scope of this short post. Most intriguing did I find the assertion of Percy Scholes, a music historian who wrote in the early twentieth century, that a very similar melody belonged to a Jacobite (read Catholic) anthem and that Arne had stolen it as a sort of protest. I found this doubly interesting on the theory that turn-about is fair play, in light of the American patriotic song, “My Country, ‘Tis of Thee.” LOL.

PS: I’d love to engage in an actual conversation here. However, as I’ve said on another post (which–despite almost three-dozen likes and (to date) seventy comments–didn’t make it to the main feed), I’ll not sit quietly by while those of you who find the idea of a monarchy of any sort inimical can’t express your disagreement in other than insulting terms towards those of us who–whether subjects or interested bystanders–find ourselves well-pleased with such a system.