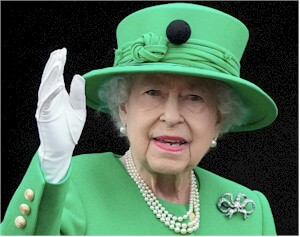 You’ve got to hand it to the late Queen.  Not only did she manage to die in Scotland, giving the Palace an opportunity to drive her past thousands of loyal and respectful Scots to Edinburgh for a lie-in at which thousands of people queued up to view her casket, and then past thousands more as she was driven to the airport for the flight home (The First Minister of Scotland, Nicola Sturgeon–who represents the Scottish Nationalists–must have been regurgitating her haggis the whole time); she also died on one of the rare occasions that Harry and Meghan were actually in England, thereby side-stepping the inevitable “will they fly to the UK from California–Will Meghan go with?” circus that would otherwise have occurred over the course of days and distracted from the main event.

September is a pivotal month for political parties as they gear up for a poll in which the fate of both houses of Congress hangs in the balance.

During the 2018 midterm elections, MissionWired, a Democrat fundraising company, saw donations surge by 133 per cent.

But, according to Nat MissionWired’s Nat Binns, the increase is projected to be about half the 2018 figure.

“The coverage of the Queen disrupted that moment,” Mr Binns told the New York Times.

“It feels almost like we have to start over to build it up.”

God Save the Queen!

(I wonder what she’ll get up to next.)

PS: The article does say that Republican fundraisers didn’t respond to the NYT’s request for information.  I expect their funding was down some too; but I should think the Democrats were hoping for a post-Roe-decision bonanza,  and apparently they fell far short.