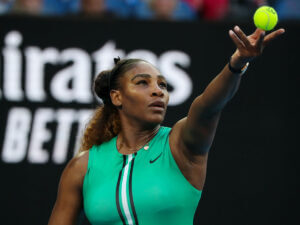 There seems to be things these days that we cannot say. Influenced by PC or whatever – you shouldn’t say them. Well, I’m about to go ahead and say one anyway:

I don’t like Serena Williams. Can’t say I never did; she once was very pleasantly innocent, naïve and wide-eyed way back when. Older sister, Venus, lead the sisters into sport dominance until Serena exploded past her into the phenom she was for the following 23 years.

Serena showed unbelievable talent. And her desire to win only faded a bit Friday night as she reluctantly gave into her final match. Her desire to win that last game – was it the fifth or sixth match point before the inevitability of the evening took over? – seemed unmatched until it wasn’t. She couldn’t pull it out. And all the fancy, private-jet-delivered attendees who don’t know the difference between deuce and match point, moaned and emotionally collapsed as Serena couldn’t manage the strength to scream “I’m forty. I did my best! I’m done!”

But the unending desire to go on that Serena had surely always shown, did end. And it allowed a pause for us to finally consider some things in her professional past that mightn’t be so GOAT-flattering. As one remembers, in not such the distant past, she demonstrated she could be a world class player and loser. Not just shamelessly bombastic at the refereeing of the US Open 2018 Finals match in which she lost, Serena kept emotionally lamenting another opportunity at a Slam title lost that, winner, 18-year-old Naomi Osaka, could not believe what was going on around her. Naomi just knew that the moment her young life had been building to for all these years was being trampled. Trodden by the antics of the half-billionaire and her disbelief at being the victim of a Slam final first-timer and maybe not thrilled she happened to be one of color as well (if I might add).

In career’s nascence, It took no shortage of time for the wonderfully fresh-faced and joyfully wide-eyed girl from Compton in Los Angeles County to believe not only that the world was her oyster but that the billion-dollar pearl inside was the first of a necklace. Especially when compared to her gracious sister, her ego was, in not a terribly long time, evident in every picture, her self-importance obvious in every scream on the court. A journalist friend here in New York shared with me how she and her hangers-on one evening during a prior US Open arrived at a well-reputed although under-celebrated and attended restaurant in Harlem, ate and drank to capacity, then when over, split without even going through the formality of asking for the check. Having worked with well-known actors most of my life I never saw, even once, one of them reach for the bill. I hadn’t realized it extended to tennis players and their dozen best friends, too.

As a show business acquaintance once let me know, there is something quite unsettling about a star athlete instead expecting to be treated like a genuine movie star when arriving on the set to do a Direct TV commercial. But that’s what Serena apparently did. Given all her fortunes, money clearly wasn’t the object. As folks on set speculated, maybe that having nothing else scheduled for that day, she just enjoyed showing up and having her ass uber kissed that afternoon.

I played tennis on the college level way back when and being a singles player makes you rather selfish. It’s just you out there, in your head alone. All the time. You spend so much time out there by yourself you simply become the never unending center of the universe. Always. Like a child. It’s understandable but not all that likeable.

Easily put, all this has added up to a very unflattering conclusion. Serena Williams has become Meghan Markle.

It’s no simple exercise getting to the point of disliking SW. Her early life was not easy, especially if you’ve ever been to Compton. We all know the story of her half-sister, Yetunde, who, long ago, met her fate simply by standing on the porch of the family home there. Richard Williams at times was a very difficult father to have around.

But the absorption, the utter absorption, springs forth from her like the flowers we’ll see next April. I suppose when you’re on as a journey as long as Serena’s, you lose some people along the way. I’m tired of her. I’m one of them. Good luck to her in her new but hopefully inconspicuous life.