Almost college football season.  Which I have been waiting for since January for the last 67 years.  Hopefully about the season my football factory (Oklahoma) will have a great season given the new coaches and lots of NIL money to spread around. Now the fan boards lit up that a terrific former OU player and […]

The voice of the Los Angeles Dodgers has passed away. As a Giants fan, I have listened to Vin Scully call games between the Giants and Dodgers. That rivalry is one of the best and at times the most contentious in baseball.

Contentious in that I’m a fan of any other team that is playing the Dodgers on any given day or night. Today is different I have something in common with Dodger fans. I’m mourning the loss in the City of Angels of a broadcasting legend, and more importantly, a good man. 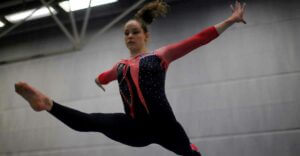 Like many people, I have grown up watching gymnastics on TV, and I’ve always admired the strength and agility of the girls and young women. My attention was especially triggered by the latest controversy regarding the sexual abuse of the American Women’s Olympic team. Most of them were teenagers, not even through puberty, and I didn’t give any thought to their uniforms. It didn’t cross my mind that their choice of uniforms had anything to do with the abuse, and it still doesn’t.

But about a year ago, I saw a floor performance that made me very uncomfortable. The gymnast was a full-blown, mature-bodied woman, and her routine was sexy and (I thought) provocative. I watched the whole routine with a level of perplexity and discomfort, not understanding my reaction. Ever since then, I have questioned the appropriateness of woman’s gymnastic uniforms, and still don’t feel resolved about it.

A couple of years ago, some women from the German gymnastics team decided to make a change in their uniforms to a full body suit:

Join Jim and Greg as they wade into the rare territory of giving credit to House Speaker Nancy Pelosi for planning to visit Taiwan in the face of Chinese threats against her. Sadly, President Biden has once again displayed his default position of weakness on this issue as well. They also rip Paul Krugman for trying to claim that the economy is actually really strong and that people think their own financial situation is fine but the media keeps convincing everyone things are bad. And they dissect the six-game suspension for Cleveland Browns quarterback Deshaun Watson after two dozen women accused him of sexual harassment or worse but no criminal charges were filed.

ICCSA 65th Annual Regatta For those unfamiliar with sailing terms, a regatta is a series of boat races. They’re usually held over a weekend for a prize akin to the one in the photo. The usual format for ours is two races in the morning and two races in the afternoon, then on to the […]

There is still a lot of speculation on whether Notre Dame football will join a conference. The latest stories have ND trying to negotiate a $75 million dollar contract with NBC that would include Big 12 football games televised by NBC. It’s all about the money, and of course the Transfer Portal, as well as […]

I know the editors don’t like a post with just a link, so I’ll say this: After last year’s Bob Baffert cheating, I was thrilled when this year’s Derby winner came back clean.  Yesterday the horse’s jockey, owner and trainer got their engraved trophies.  Horse racing is one of the few sports left where the […]

I know there are some other golf fans hereabouts. Anyone watching LIV Golf? (That’s LIV with a short i, as in “We live for golf.”) Just to be clear, I like watching golf but I don’t play it. Golf looks hard. And playing it would require me to leave my house, spend money, and socialize, […]

USC and UCLA are leaving the PAC-12 for the BIG-10 in 2024. In this new era of conference jumping, or the Mega Conference will Notre Dame join a conference. Do they have to join a conference? There are 15 million reasons why they probably will remain an Independent in college football. Their NBC television contract […]

Earlier this week, @barfly wrote a post reporting on the rules adopted by the international governing authority in swimming, FINA, on so-called transgender athletes.  Specifically, the rules addressed the issue of biologically male swimmers who wished to engage in so-called transition, and then compete as females.

Barfly’s post includes the specific text of the rule, the essence of which is to prohibit anyone from competing in swimming as a woman if he has “experienced any part of male puberty beyond Tanner Stage 2 or before age 12, whichever is later.”  There is also a requirement for demonstrating the continued maintenance of a low testosterone level.

Scot Bertram of Hillsdale College and the “Political Beats” podcast is in for Jim. Scot and Greg break down a new poll showing Americans solidly opposed to biological males competing in women’s sports. They also chronicle the decision of Gannett and other newspaper publishers to scale back on opinion pages. And they hammer most of the media for ignoring violence against crisis pregnancy centers while CNN covers it disingenuously.

“Political Beats” host Scot Bertram is in for Jim today.  Scot and Greg cheer Iowa voters for ousting four Republican lawmakers who opposed legislation to give parents more options on how to educate their children. They also hammer Democrats and the media for greatly downplaying the arrest of a man attempting to kill Supreme Court Justice Brett Kavanaugh not far from Kavanaugh’s home. And they groan as the Grammys try to attract more viewers by adding new awards, including one for “Best Song for Social Change.”

As the the nation pauses for Memorial Day, Jim and Greg also take time to honor the brave Americans who gave their lives for this nation and their families who have sacrificed so much. They also take some time to give you the background on how this podcast began and how each of them became conservatives

So in other news today, Fox has announced that after he retires from football (again) Tom Brady will join the network as the analyst on their lead NFL broadcast team. There is no question that Brady is the best QB to ever play in the NFL. However, the skill set to be a great QB […]

I’ll be watching with new interest since neutral observer and I took a tour of Churchill Downs with Randy and Sarah Weivoda on the Bourbon Trail Meetup.  I can imagine being on the rail watching the horses sprint to the finish line: Preview Open