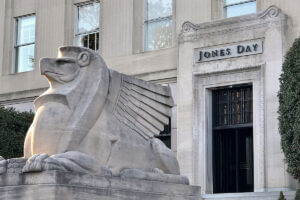 A recent magazine section in the Sunday New York Times breathlessly announced the “untold story of Jones Day’s push to move American government and courts to the right.” Jones Day is a powerful and well-respected law firm. The author of this exposé is an investigative reporter, David Enrich, who draws this excerpt from his new book, Servants of the Damned: Giant Law Firms, Donald Trump, and the Corruption of Justice, whose lurid title all too well sums up his grandiose thesis. Enrich is not a lawyer, nor does he argue like one. Instead, his modus operandi is to merely assume that Donald Trump, any of his associates, and indeed any conservative cause deserve intense public condemnation.

Enrich wants to delegitimize Jones Day by turning the firm into an arch-villain. He hopes first to make Trump persona non grata, so that large corporate law firms will rid themselves of Trump loyalists and dissociate themselves from any conservative causes. In going after Jones Day, Enrich lurches into dangerous territory by branding it ethically improper, if not downright immoral, for individuals to defend causes with which Enrich disagrees. His ultimate objective is to neutralize conservative law firms, a goal toward which at least one giant law firm appears already to have moved. (Kirkland & Ellis parted ways with two of its most distinguished lawyers—Paul Clement and Erin Murphy—because of their successful and sound defense of gun rights in New York State Rifle & Pistol Association v. Bruen (2022).) It would be equally wrong to mount this kind of crusade against any left-wing firm that decided to defend any of President Joe Biden’s initiatives on immigration, student loans, foreign affairs, or climate change. On both sides, it is far better to argue a case on the merits than to cast aspersions on the people and causes with which you disagree.

Unfortunately, dismissive condescension is Enrich’s stock and trade, whether he directs his poisonous pen towards individuals or causes.

I am privileged to have worked with some of the individuals whom Enrich wishes to cast into the lowest circle of Dante’s Inferno. For example, before he graduated in 1996 from the University of Chicago Law School, Noel Francisco was a star student in my Roman Law seminar, which aimed to teach the importance of private law institutions and the relevance of natural law theories. Another purpose of the seminar was to discredit the excesses of legal realism, chief among them the notion that law is always relative and thus infinitely malleable. Unless this defense is mounted for traditional rules, there is no way to keep extraneous political influences on the law at a minimum. Francisco has learned this lesson and has the strength of intellect and character that few lawyers can match.

I also worked closely with now-judge Gregory Katsas of the District of Columbia Court of Appeals in 1988, when Katsas was the executive editor of the Harvard Law Review, on my piece “Foreword: Unconstitutional Conditions, State Power, and the Limits of Consent.” He and the then-president of the Harvard Law Review, Dan Kahan, now a professor at Yale Law School, were the perfect student editors. They prodded and critiqued every word that I wrote on what is one of the great puzzles of constitutional law: in a world in which states conduct ever more activity through licenses and grants, laced with troublesome conditions, when does consent to the exertion of state power fail to insulate the government from constitutional challenge? We need more people like Judge Katsas on our courts.

The same can be said of my former student and research assistant, Eric Murphy, who now sits on the Sixth Circuit after serving as solicitor general of Ohio. I still remember the day at the end of his first year of law school when he edged into my office and asked if he might have a job as my research assistant. I sat Eric down for a few questions and quickly realized that he had a greater command of legal principles than the two most recent faculty appointment candidates that I had just interviewed.

It boggles the mind that Enrich actually thinks it is impossible for conservative scholars, lawyers, and judges of such intellectual heft to have sound legal principles. In fact, many lawyers share in whole or part the classical liberal beliefs of limited government that I, and the aforementioned legal minds, have championed for years. Of this approach, Enrich knows nothing.

Enrich repeats the constant false trope that the Trump administration corrupted American justice by giving the Federalist Society tremendous influence over judicial nominations, and consequently shaped the judiciary. Here, Enrich is wrong on two counts: (1) The Federalist Society itself takes no position on any political or legal issue, including the selection of federal judicial nominees; and (2) Enrich seems to think that his mere mention of the society—with which I have worked closely since its founding in 1981—proves that President Trump corrupted the judicial nomination process. Indeed, one of then-candidate Trump’s shrewdest maneuvers in 2016 was to release a list of potential Supreme Court nominees, thereby quelling many doubts about his judgment on judicial appointments. Put bluntly, Enrich has not given the slightest reason to discredit the performance of any Trump appointment to the bench.

The situation is perhaps worse when Enrich takes on Jones Day for its legal positions.  His anger at Jones Day rests not on a contention with the legal merits of its attorneys’ arguments, but rather on Enrich’s personal ideological desire to belittle or disparage conservatives. Thus, in one terse paragraph, he first chastises Jones Day for winning the case in which “the court killed the Biden administration’s moratorium on home evictions during the pandemic.” Contra Enrich, Alabama Association of Realtors v. HHS (2021) went to great lengths to explain why the CDC clearly had exceeded its statutory mandate when it acted as if a national suspension of evictions from homes and leases fell within a regulatory mandate that covered standard measures like fumigation and pest extermination.

In the next sentence, Enrich keeps up the attack: “[I]n another case Jones Day worked on, the court would severely limit the Environmental Protection Agency’s regulation of power-plant emissions,” referring to West Virginia v. EPA (2022). There, a divided Supreme Court took the sensible position that the performance standard provision regulating new stationary source emissions by determining the “best system of emission reduction . . . that has been adequately demonstrated” did not allow the EPA to order massive shifts in energy production from fossil fuels to renewables. Quite simply, the statute is better read to require a firm to put new filters on its emission valves.

Enrich takes special delight in castigating Donald McGahn, who played an extensive role in selecting Trump’s judicial nominees, for being Jones Day’s counsel of record in a friend-of-the-court brief for a long list of senators and congressmen in the difficult case of Kennedy v. Bremerton School District (2021). Jones Day’s brief was one of many that defended a football coach from dismissal for praying with some of his athletes and others after football games. Enrich condemns the firm for arguing that the dismissal, if allowed to stand, would mean, for example, that “a Jewish librarian may not put on his yarmulke and silently study a religious text in the library during his break.” McGahn offered that point to challenge the extremes to which the principle of separation of church and state had been taken in the Ninth Circuit.

Kennedy is notable for the genuine confusion in the record over the facts of the case. Moreover, it would never have gone to litigation if the school superintendent had avoided the ridiculous position that Kennedy’s continued public prayer would open the school district to liability under the establishment clause. Is this the best evidence Enrich can muster for his claim to expose “how a corporate law firm led a political revolution”?

To Enrich, Jones Day’s worst sin was to challenge a decision by the Pennsylvania Supreme Court that counted mail-in ballots received after Election Day. Refusal to count those ballots would not violate the state’s constitutional guarantee of “free and equal elections,” Jones Day argued, reasonably contending that the opposite interpretation was a real stretch of the constitutional language. The statutory text, in fact, said the ballots had to be received by Election Day. The Pennsylvania Supreme Court carved out its own COVID-19 complication exception to count votes cast before Election Day but received afterward, even though the Pennsylvania statute had already built in its own set of COVID protections. The court clearly pushed the legal envelope, and the case was sufficiently difficult that it received a divided outcome in the United States Supreme Court.

In the broadest view, everyone should want a strong firm with deep convictions like Jones Day to argue important cases. Enrich’s accusatorial, one-sided condemnation raises the specter that left-wing forces want to strip conservative causes of effective representation and thereby sideline conservatives politically, rather than win arguments in free and fair debate.