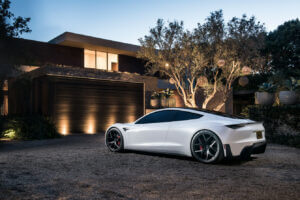 Imagine my surprise when I saw a Tesla backing out of a parking space and no one—not even in the driver’s seat—was inside! But then I should tell you the whole story, and then I’d like to get your input.

The other day we were working out at our gym. An older fellow has been showing up fairly regularly on the days we’re there: he’s very incapacitated and works with a personal trainer; he’s tall, thin and although his mind seems intact, his body seems severely limited, as he moves very slowly. I didn’t pay much attention to him since I keep busy monitoring my own workout.

When my husband and I left the facility, we headed to our car parked in the lot. We noticed a fellow standing near our car, staring at the car next to ours—which was slowly backing out of its parking space and turning toward our car. But no one was in the moving car!

We all called out, and suddenly the car stopped. And then we saw the man I described earlier, slowly making his way toward us. He explained that he is able to drive the car remotely to where he is standing, and it works fine as long as no one or nothing is in the way. He basically has the car pick him up.

Meanwhile, he moved his car forward with his remote control, got in his car, and spent a couple of minutes orienting himself. We looked at the logo on the car, and it was a Tesla.

As we got in our own car and finally caught our breaths, we started to ask ourselves questions: is it legal for him to do that? Should he even be responsible for “moving” the car? What if the car had hit our car? What if he had hit a person in the parking lot? Should we have talked to him more? Should we have reported him to someone?

If I see him again at the gym, I may initiate a polite conversation with him.

Is this crazy or what?