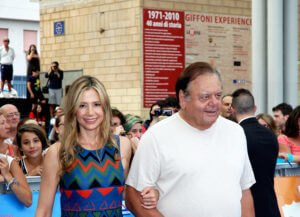 I’m pretty much retired as the unofficial Ricochet obituarist, but I can not let the passing of actor Paul Sorvino go by the boards. Well, yes, I can. Because I really can’t say much about him as an actor. There are no roles of his that truly stand out for me. But the most important role was that of proud papa.

In 1996 when his daughter Mira won the Oscar for Best Supporting Actress for her performance in Mighty Aphrodite she thanked her parents, but particularly her father. He was, in turn, a blubbering mess. His money, his fame, his politics – everything but the love he felt for her at that moment – was irrelevant.

When he heard that serial sexual harasser Harvey Weinstein once made a move on her he was very blunt with TMZ on the situation:

“He’s going to go to jail. Oh yeah. That son of a bitch. Good for him if he goes, because if not, he has to meet me. And I will kill the motherf****r. Real simple.

“If I had known it, he would not be walking. He’d be in a wheelchair.”

He was every good dad.

“My heart is rent asunder- a life of love and joy and wisdom with him is over,” she wrote. “He was the most wonderful father. I love him so much. I’m sending you love in the stars Dad as you ascend.”

The just man walketh in his integrity: his children are blessed after him. (Pro. 20:7)