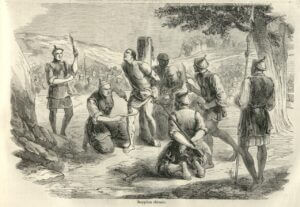 Are you familiar with the phrase used in the title? It comes from an ancient Chinese method used against criminals called Lingchi. It describes a kind of torture, actions that slowly and painfully lead eventually to the death of the victim.

Over the last several months, as I study the suffering that has been spreading across this country, I live in a personal state that shifts from bewilderment to dismay. There seems to be no end to the misery that has been inflicted on U.S. citizens, and to bring sanity to my perspective, I decided to tally several of the destructive policy actions taken by Biden’s administration and also note how their inaction has been just as damaging.

The despair of the American people has reached a new low, and there’s no sign of recovery in the near future. The actions (or inaction, as the case may be) of the Biden Administration demonstrate a widespread indifference to the impact of their actions on the populace. I think many of us choose to deal with the situations by looking at them as they occur, one instance at a time. I think the way the media broadcasts current events is designed to make sure that at no given time are we bombarded with an onslaught of bad news. That strategy is not new, but due to the multitude of attacks on our way of life, we are not inured to the growing pain. I don’t intend to increase the pain of our citizens by my observations, but if we are going to face the state of the country and seemingly endless suffering, it makes sense to take a good, hard look at the comprehensive effects on our lives.

It’s difficult to separate some of the devastating impacts because they are interrelated. But here is one way to look at the ongoing state of affairs:

Crime—on our streets, gun deaths (thus, gun control continues to raise its ugly head); border crime with the cartels and gangs; deaths from fentanyl; lawless prosecutors who release criminals onto the streets; raiding stores with little to no penalties .  . .

Censorship—social media attacks; refusal to broadcast COVID and vaccine information; refusal to allow conservative ideas; ignoring most recent data on wearing masks; ramping up fear every time there is a rise in the cases; refusal to publicize reduced deaths and hospitalizations; ignoring the science. . .

Education—corrupting U.S. history at all levels; dumbing down student requirements for learning; still promoting Critical Race Theory; tarring parents of students as terrorists; demands of teachers’ unions; decisions of unions that have harmed students psychologically, physically, and educationally; demanding vaccines and masks for students (even though children are barely affected by COVID) . . .

Employment—small businesses’ difficulties in having a steady workforce; government paying people to stay home; effects of inflation on supplies, salaries, and the customer base . . .

Damage to social mores—religion continues to be condemned and removed from everyday life; socialism and Marxist ideas are actively promoted; traditions are ridiculed; gender issues, including transgender issues, are corrupting our children. . .

Destruction of energy sources—shutting down pipelines; encouraging the opening of refineries with no guarantees for maintaining start-ups; regulations; heating prices escalating; brown-out occurrences; shortages of different types of energy sources . . .

I could list several more issues; feel free to add your own. When we look at this small list, though, we can see that there is no aspect of our lives that is not touched. All the areas of our lives that provide us sustenance and comfort—food, shelter, safety and security, learning, religion—have been damaged or limited. Slowly but surely, our lives are being altered by events that are no longer in our control.

The true tragedy is that there are no indications that the Biden Administration is sympathetic to the wounds they are inflicting on our lives. We are essentially told that these outcomes will lead to better lives, a better planet, a safer environment. We will in some unpredictable future appreciate the sacrifices we are making.

Even though we are dying the death of a thousand cuts.

You may also have noticed the irony that the torture method is Chinese and is used against criminals.