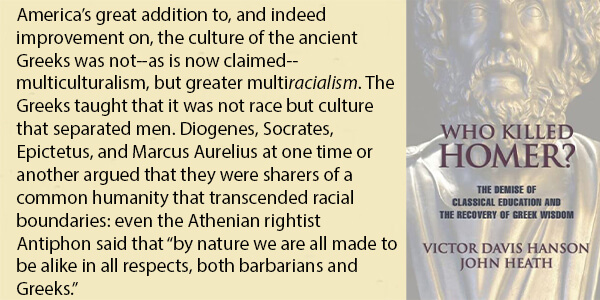 Victor Davis Hanson is the model of a history professor in the Classics, with a primary focus on Ancient Greece and Rome, and the history of warfare.

Like Thomas Sowell, he sees the clear and present dangers we are confronting. Check out his essay in last month’s American Greatness: “The Sovietization of American Life.”

After Lenin, Stalin was the prime implementer of totalitarianism under the guise of communism in the Soviet Union. Solzhenitsyn identified a particular distinction between the Stalinist brand of communists and the Nazis. Whereas Nazis dehumanized many classes of people, turning them into mere objects to be wiped out, they still humanized each other. Stalinist communists, on the other hand, dehumanized everyone, even themselves. All were ripe for extinction when departing from the shapeshifting State for any reason. And they accomplished this dehumanization initially through language. 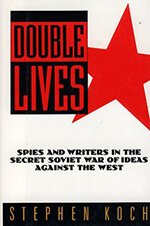 Stephen Koch in his Double Lives: Spies and Writers in the Secret War of Ideas Against the West is great at exposing how Soviet agent Will Munzenberg worked in 1920s Germany, years before the Frankfurt School, to corrupt the language and ideas of academics, artists, writers, musicians, and others who influence culture.

Will is the primary source for that trend of literary criticism known as Postmodernism–Structuralism, Post-Structuralism, Deconstructionism, etc. He is the reason we would later be inflicted by the likes of Jacques Derrida, Michel Foucault, Richard Rorty, and a mass of academics who have infected the language in all our institutions, especially English departments.

One Amazon reviewer states the core truth of Koch’s book:

This is an extraordinary history of Soviet influence operations in Europe and the US before WWII. People mock conspiracy theories, but the fact is that there was an organized, multifaceted, and well-funded Soviet program to influence public opinion in Europe. The details are fascinating, and Koch’s writing is elegant and often savagely ironic. This is an engrossing and enlightening book.

Language is the foundation of thought. Corrupting language is the quickest way to corrupting thought. The aim is simple: interrupt the developing ability of people to tell the difference between reason and rubbish. Keep them responding like mere emotional children.

As such rubbish makes its way into academe, like buried chemical waste (as articulated over many years by Richard Mitchell, The Underground Grammarian), the corrupt language eventually makes its way into the liberal arts, into journalism and media, into government and government administrators, into philosophy, into law, into science, into corporations, into religion, into every aspect of public life. 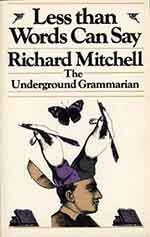 Mitchell states in Less Than Words Can Say (free online),“American public education is a remarkable enterprise; it succeeds best where it fails. Imagine an industry that consistently fails to do what it sets out to do, a factory where this year’s product is invariably sleazier than last year’s but, nevertheless, better than next year’s.”

Corrupting definitions is crucial. Thus, dictionaries are eventually targeted, turning them away from being clear, thoughtful guides to boundaries for understanding the common language of culture and community, and into something resembling Evil Dictionaries.

Hey, how better to obscure the root cause of rising prices than to redefine the term inflation into simply meaning rising prices, rather than a conscious government act of printing up money, creating massive debt, and inflating the currency supply, which naturally results in rising prices?

Why have the ancient Greek and Latin languages been removed from almost all universities? Because despite being dead languages, they illuminate too many truths about human nature, critical thinking, the repeating nature of history, the actions of political leaders, the power of rhetoric, and the foundational importance of clear definitions. Studying Plato and Aristotle and the Greek tragedians and the Peloponnesian War and Cicero and Ovid and The Aeneid and Livy and Epictetus…

Corrupting language has the added benefit of isolating people, creating tribes, and destroying community and families. Not just the things themselves. The ideas. The definitions.

Men can be women. Women can be men. Children are to be educated with a new language. The language of totalitarianism, which simply means something can be anything and therefore is nothing. People unable to distinguish anything are easily made into serfs and slaves.

Go back to the Victor Davis Hanson quote at the top. In the book Who Killed Homer?, he and John Heath help us understand how critical definitions are to understanding reality, especially the terms that build true community. Totalitarians hate genuine communities outside the shapeshifting community of destruction they implement every day.

Whatever your community, its language must be destroyed.