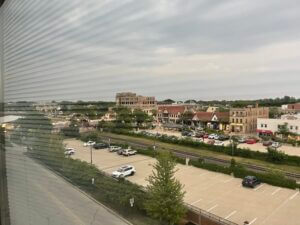 First, I was in Ohio when the shooting took place in Highland Park, but it’s where I’ve lived for the past two years. And I’ve loved it here.

Second, the shooter basically shot at my building. That is, he was across the street, and all the people he shot at were on the other side of the street, on a plaza that encompasses my apartment unit.

There was blood in the lobby until very recently. I’m surrounded by crime scene tape. There’s been nothing but police officers with big guns everywhere, but nobody knows anything. Or they can’t tell me anything.

I spent Monday night in a hotel in the next town over — by the time I knew how bad the situation was in Highland Park, I was already much closer to there than it would have been to turn around and go back to Ohio. So I grabbed some carryout and had a rough night. I just didn’t feel real.

Fortunately, it seems like nobody I know here was killed in the shooting and I don’t think anybody has been injured, but there are some folks I won’t know about until I go to church again.

Until then, I guess I have to check in with the police and FBI if I want to leave my apartment and get back in. There’s nobody telling me how long that will last. As it happens, I was never able to update my driver’s license because the secretary of state’s offices were closed because of COVID, so proving residency has been a chore.

I’m thinking that I might break my lease and move to Wisconsin, but I don’t know if my job will allow me to move as far away from a city as I want to. I’ve always liked living in a city/town, but now don’t want to live in a town anymore. At least not for the moment.

Finally, the weirdest thing is how everything else seems to just move on without me. The Twitter pundits exhausted themselves and have moved on. The public transit line outside my place is back to its regular schedule. It’s normal and it’s good, but it’s also hard because not far from where I’m writing this, so many people were killed. I’m not sure when it will feel normal, or if it even should

I guess there’s not much point to what I’m writing, but it helps to get it out. Thanks for reading.