It is easy for intelligent and engaged citizens to have been caught up in the apparent spirit of the age. I even had an aged, beloved family member who, after a lifetime of dismissing any information coming from a politician, suddenly citing the Republican “Morning” Joe Scarborough (her phrasing, not mine) as a source of truth and wisdom.  While he repeated the most ludicrous talking points.

The only source of information worse than a politician is a retired politician who has sold his reputation for a media gig. In her defense, she was suffering a long illness and television was her only reliable distraction. A retired friend from church was in a similar state, but she recognized she was torturing herself. She watched the media all day, becoming more and more anxious and angry as she did so.

It is common knowledge that 9/11 served as a live experiment in captivating audiences through the manipulation of fear and anger, with CNN becoming a big winner in the never-let-them-go jackpot. I reminded her of that, and that corporate media, whether it’s the alphabet soup or the WallPoTimes, is the most unreliable news source because of the Narrative.

In the Internet Age, it is easy to set up an RSS news reader to watch a couple of hundred sources of all types to proof stories. Be willing to check local news organs, preferably before corporate has time to reach down and sanitize, and the heavy hand of the narrative at the MSM level is as undeniable as it is twisted. But you guys know this. We’ve taken this trip together.

We are the target of a massive disinformation campaign. An overarching psyop. YouTube, Twitter, and Facebook are the idiot division, so clumsy and obvious in their Stalinist efforts that everyone knows they are lying clowns laying down sniper cover for the study stream of disinformation. They are conspiring now to murder infants with the jab, despite their radical absence of risk from the disease. And, of course, there are the show trials.

I was at breakfast after church the other week. It’s my routine: bacon and eggs to chase down the eucharist. The diner is very nice, serving a very diverse clientele. On mornings when I have not gotten to it beforehand, I quietly say my Auxilium Christianorum in the chatter and clatter of the morning while waiting for my order.

Now, this is in an area where the biggest signal radio station is a people of color focused station that is the very negative image of Rush Limbaugh, both in content and presentation, hammering out their vision of an identity pathologically indigestible by the melting pot. They play public-service announcements pushing home schooling to assure children receive the full benefit of a proper Critical Theory education, and advertise shows about the heroic adventures of Howard Zinn and Saul Alinsky. All day, all night. This place must be a hotbed of racial strife and resentment. Or so some would like it to be. And it is in the heart of this target of anger and division that, as I was finishing my eggs (easy over, using the toast to sop up the yolks) a family walks past my table and a girl, no more than seven, stops and turns to me, saying, “This is for you.”

She scurries to catch up with her family and is out the door, leaving me with the napkin below. 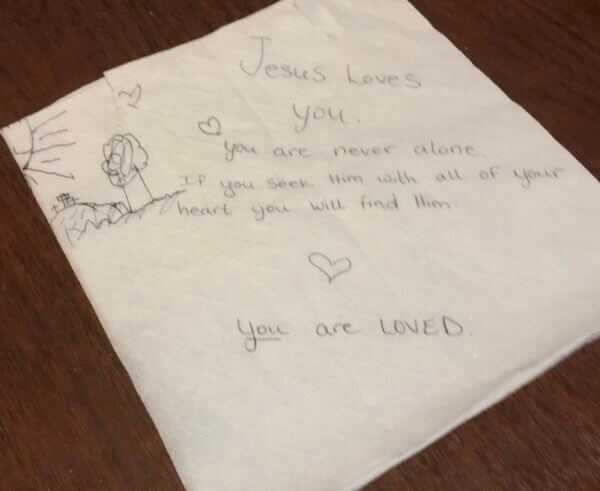 Yes, her family were people of color, and I, as a person of pallor, am worthy only of stoning according to the genocidal dictates of Critical Theorist accusers. Don’t take my word for it, just turn on your radio. But this young girl is inoculated from the hate-mongers by the blood of the Lamb. Lord bless her and the faithful that raise her, and the many like her. The darkness will not win in the end. It is a test of the faithful, the Church Militant. Remember to don your armor of God, my friends. And remember your prayers.

Happy Lord’s Day this third of July, may He bless you all. And to steal a friend and teacher’s tagline, may America bless God.