I’m borrowing my title from the punchline of Dennis Prager’s latest piece about Dobbs and the difference in sexual natures between men and women. Is it too late for a Spoiler Alert?

I confess, I’ve taken my eye off the ball of saving babies to revel in the feminist leftwing lunacy on display. 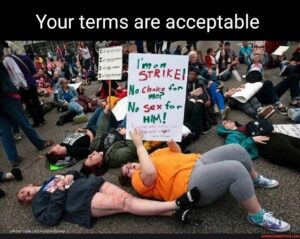 Does this mean “abstinence” is no longer a dirty word? You know, like when pro-lifers wanted it taught in sex-ed classes to their children (sidebar: public education shouldn’t be in the business of teaching about sex anyway! It already sucks at teaching reading, writing, and arithmetic)

And speaking of words, I think we need to define some terms:

This is the Big Lie of feminism and the sexual revolution, generally. Men and women are different in their natures, sexual and otherwise. Abortion is poison for women (sometimes literally) and a huge gift to sexually irresponsible and predatory men.

Women can’t have consequence-free sex, either biologically or emotionally. Turns out, women are made to be mothers and, once they are, they need men to be supportive of them in that role. Which is why I find pro-abort activist men so icky, even if Meghan Markle thinks they need to “be more vocal.”

“These are decisions that affect relationships, families, and communities at large,”

I think I just said that, Meghan, you ignorant slut.

Abortion liberates men from taking responsibility for the women they impregnate. Duh. Women would be so much better off if we were cherished and supported for the gift Nature (and her God) has given us of mothering the next generation. And the men who do that? They need to be honored and appreciated, too.