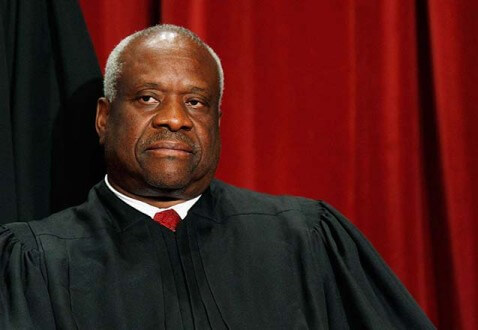 In the exuberant happiness, relief, and pure joy of what one observer has called “one of the greatest weeks in the history of the U.S. Supreme Court”, one very short dissent by the Justice who is now recognized as “the undisputed intellectual leader of the Court” has been largely overlooked. However, its importance cannot be overemphasized as a potential “harbinger of something important still to come.”

That lone dissent, as so many of his dissents have been over the years, was written by Justice Clarence Thomas who, if my admittedly somewhat blinded judgment in view of our admiration for the man may be pardoned, should clearly be Chief Justice Thomas. In his dissent on Coral Ridge Ministries v. Southern Poverty Law Center, Justice Thomas — once again — expressed his frustration over the reluctance of the Court to take up the extremely unjust rule of New York Times v. Sullivan which requires a showing of “actual malice” before a defamation suit can proceed. The result of this rule is that interest groups and media organizations have been allowed “to cast false aspersions on public figures with near impunity.”

What caught my attention about this case was — aside from the fact that I try to follow Justice Thomas’ writings as closely as possible — that the defendant in this case, the despicable, disgusting, odious, execrable Southern Poverty Law Center, is, as it is described in yesterday’s Powerline piece on this case, “one of the great grifter organizations of our time” and one which specializes in smearing conservative organizations only, often inflicting great damage on them. Some time ago, I decided to do some fairly deep research on this grotesque façade of a “public interest group” and my findings (published under the title “The Poverty Palace That Hate Built” can be found here) were sickening, to put it mildly.

Here are a few portions of the dissent but I wholeheartedly recommend reading it in its entirety to more fully appreciate the deep and searching intelligence of this horribly unjustly maligned man who we are certain will be remembered in future histories of the Court as one of the greatest Justices to ever serve on the Court:

Coral Ridge Ministries Media, Inc., is a Christian non-profit dedicated to spreading the “Gospel of Jesus Christ” and “a biblically informed view of the world, using all available media.” 406 F. Supp. 3d 1258, 1268 (MD Ala. 2019) (internal quotation marks omitted). In 2017, Coral Ridge applied to receive donations through AmazonSmile, a program that allows Amazon customers to contribute to approved nonprofits. To its dismay, Coral Ridge learned it was ineligible for the program. The Southern Poverty Law Center (SPLC) had designated Coral Ridge an “Anti-LGBT hate group” because of its biblical views concerning human sexuality and marriage. Id., at 1270 (internal quotation marks omitted). AmazonSmile excluded Coral Ridge based on SPLC’s “hate group” designation.

I would grant certiorari in this case to revisit the “actual malice” standard. This case is one of many showing how New York Times and its progeny have allowed media organizations and interest groups “to cast false aspersions on public figures with near impunity.” Tah, 991 F. 3d, at 254 (opinion of Silberman, J.). SPLC’s “hate group” designation lumped Coral Ridge’s Christian ministry with groups like the Ku Klux Klan and Neo-Nazis. It placed Coral Ridge on an interactive, online “Hate Map” and caused Coral Ridge concrete financial injury by excluding it from the AmazonSmile donation program. Nonetheless, unable to satisfy the “almost impossible” actual-malice standard this Court has imposed, Coral Ridge could not hold SPLC to account for what it maintains is a blatant falsehood. Dun & Bradstreet, Inc. v. Greenmoss Builders, Inc., 472 U. S. 749, 771 (1985) (White, J., concurring in judgment).

An excellent brief analysis of this dissent can be found at Powerlineblog.com and it contains the following observations:

The culprit here is twofold: 1) the requirement that to be actionable, a statement must be one of fact, not opinion; and 2) the “actual malice” standard–the standard that a public figure plaintiff must prove not only that the defendant (here, SPLC) was careless in libeling him or her, but rather that the defendant knew that what it said was false, or knew that it was likely false, and said it anyway. For obvious reasons, this subjective standard has proved impossible to meet in nearly all cases involving public figures.

Justice Thomas concluded his dissent with these most appropriate words:

Because the Court should not “insulate those who perpetrate lies from traditional remedies like libel suits” unless “the First Amendment requires” us to do so, Berisha, 594 U. S., at ___ (opinion of THOMAS, J.) (slip op., at 3), I respectfully dissent from the denial of certiorari.

Deep wisdom from the mind of a great man.