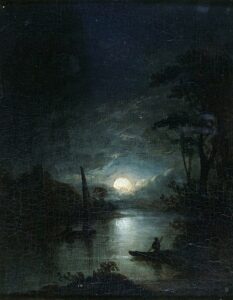 There I was, noodling around a few hours ago during a hydration break (it’s been in the mid-90s today, and I have three rather large trees to plant), looking for something to write about so I could sit inside, turn on the air conditioner for a bit, and allow the sweat to dry up.  And as I often do, I had a look at Wikipedia’s page for “this day”; in this case, June 25.

I was quite surprised, in my bit of research, to find that the author of one of my favorite childhood poems, Alfred Noyes, died only 64 years ago, on June 25, 1958, when I must have been a little over three-and-a-half years old.  Unbeknownst to me, he’d led rather an interesting life, having been born in 1880 in Wolverhampton, just down the road from some of my early stomping grounds in the UK, having grown up near Aberystwyth in Wales (beautiful country), moved to the States to marry and lecture at Princeton (his students included F. Scott Fitzgerald and Edmund Wilson), and live to become (like another of my heroes, Rudyard Kipling) both decried as a jingoist, at the same time as he showed himself something of a pacifist.

I’m pretty clear that there were several formative experiences in my early life, and that many of them involved books.  For example, I think Beatrix Potter, Gerald Durrell, and James Herriot pointed me towards the life in which I find myself living on 30 acres with a (couple of) mechanical mules, doing my best to scratch out something of a country life, here in the early years of the third decade of the twenty-first century.

But I also give the nod to this book, which my parents gave me when I was five or six, and which might have presaged my love of literature, and my ending up as an English major, and–Lord knows–led the way to the love of my life and my marriage to (shock, horror!) my professor, in the days when such a thing was still possible without the concomitant self-involved sense of victimhood and inevitable litigation: 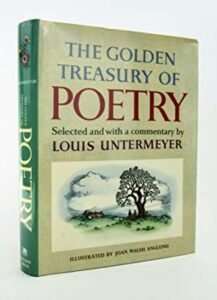 A totally unwoke exploration of the poetry of my civilization which–remarkably–instilled in me no hatred for the “other,” and no unbounden feelings of superiority.  Just the joy of life. (I think I probably do have a first edition, but there are others cheaper and just as good.)

One of the choice morsels which I discovered (at a young age)  in my perusal of the book was Alfred Noyes’s The Highwayman.  It’s a magnificent ballad, and I could discourse for hours on its techniques, including–but not limited to–alliteration, repetition, simile, metaphor, lyricism, and rhythm.  Like another of my favorite poems, The Lady of Shalott, it propels the reader into the story and along for the ride.

And, yeah, this is the early experience I blame for my lifelong attachment to what I call “tasteful bodice-rippers.”  Jane Austen.  The Georgette Heyer novels.  Some of A.S. Byatt’s oeuvre.  Corelli’s Mandolin.  And a number of others.  All of which–when it boils down to it, deal with love, sacrifice, struggle, and–sometimes, unfortunately–betrayal.  None of which things (other than the betrayal bit), over the course of my life, I’ve found it necessary to be angry about or ashamed of. Love, especially.

And so, I give you, at the end, the story of The Highwayman and “Bess, the landlord’s daughter.”  I cried buckets over it sixty years ago.  And when I read it today, I found myself wiping a tear away again, and hoping that the two of them actually did, in their ghostly incarnations, manage a happy ending.

He’d a French cocked-hat on his forehead, a bunch of lace at his chin,
A coat of the claret velvet, and breeches of brown doe-skin.
They fitted with never a wrinkle. His boots were up to the thigh.
And he rode with a jewelled twinkle,
His pistol butts a-twinkle,
His rapier hilt a-twinkle, under the jewelled sky.

Over the cobbles he clattered and clashed in the dark inn-yard.
He tapped with his whip on the shutters, but all was locked and barred.
He whistled a tune to the window, and who should be waiting there
But the landlord’s black-eyed daughter,
Bess, the landlord’s daughter,
Plaiting a dark red love-knot into her long black hair.

And dark in the dark old inn-yard a stable-wicket creaked
Where Tim the ostler listened. His face was white and peaked.
His eyes were hollows of madness, his hair like mouldy hay,
But he loved the landlord’s daughter,
The landlord’s red-lipped daughter.
Dumb as a dog he listened, and he heard the robber say—

He did not come in the dawning. He did not come at noon;
And out of the tawny sunset, before the rise of the moon,
When the road was a gypsy’s ribbon, looping the purple moor,
A red-coat troop came marching—
Marching—marching—
King George’s men came marching, up to the old inn-door.

They said no word to the landlord. They drank his ale instead.
But they gagged his daughter, and bound her, to the foot of her narrow bed.
Two of them knelt at her casement, with muskets at their side!
There was death at every window;
And hell at one dark window;
For Bess could see, through her casement, the road that he would ride.

They had tied her up to attention, with many a sniggering jest.
They had bound a musket beside her, with the muzzle beneath her breast!
“Now, keep good watch!” and they kissed her. She heard the doomed man say—
Look for me by moonlight;
Watch for me by moonlight;
I’ll come to thee by moonlight, though hell should bar the way!

Tlot-tlot; tlot-tlot! Had they heard it? The horsehoofs ringing clear;
Tlot-tlot; tlot-tlot, in the distance? Were they deaf that they did not hear?
Down the ribbon of moonlight, over the brow of the hill,
The highwayman came riding—
Riding—riding—
The red coats looked to their priming! She stood up, straight and still.

He turned. He spurred to the west; he did not know who stood
Bowed, with her head o’er the musket, drenched with her own blood!
Not till the dawn he heard it, and his face grew grey to hear
How Bess, the landlord’s daughter,
The landlord’s black-eyed daughter,
Had watched for her love in the moonlight, and died in the darkness there.

Back, he spurred like a madman, shrieking a curse to the sky,
With the white road smoking behind him and his rapier brandished high.
Blood red were his spurs in the golden noon; wine-red was his velvet coat;
When they shot him down on the highway,
Down like a dog on the highway,
And he lay in his blood on the highway, with a bunch of lace at his throat.

Over the cobbles he clatters and clangs in the dark inn-yard.
He taps with his whip on the shutters, but all is locked and barred.
He whistles a tune to the window, and who should be waiting there
But the landlord’s black-eyed daughter,
Bess, the landlord’s daughter,
Plaiting a dark red love-knot into her long black hair.