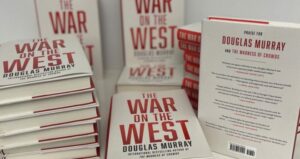 Douglas Murray is wicked smart. He can write and speak rings around the likes of me. He is witty, droll, dramatic, deadpan. Because of these theatrical attributes, and that he is good on a whole host of conservative issues, Murray is catnip to a plethora of important conservatives.

And now he is out with an excellent new book—The War on the West, a look at those who want to tear down our past, all that is European, straight, male, and white.

In this new book, he turns to the Culture War on the West by those who want to tear down statues, ruin reputations, paint over art, even dig up or otherwise denigrate plants, yes plants, that are deemed too white and too colonial. Just like math and being on time, plants are now racist. The War on the West is an immensely satisfying book, and he hits every one of the right notes. It is highly recommended.

But one thing is missing, and it is a massive thing, a foundational thing, in defending the West. And it is Mr. Murray’s blind spot.

The great writer/thinker/teacher Michael Uhlmann used to say that every country has a sexual constitution. These are largely unwritten but widely understood. The sexual constitution encompasses what is allowed and what is not allowed. Divorce was a scandal. Adultery was condemned. Unwed mothers got married lickety-split.

Janet Yellen, yes, that one, published a marvelous paper on how shotgun weddings largely disappeared with widespread availability of the contraceptive pill and how this has been a detriment to women. The great project of the Left is to destroy this sexual Constitution. Indeed, all of this has been upended.

Besides divorce, adultery, and much else, the sexual constitution did not allow sodomy. Oh sure, boys lurked around dark places, as they still do, but it was frowned upon. It was even illegal in some places. And though some folks may have smirked at such behavior and looked the other way, it still fell outside what the sexual constitution allowed.

Mr. Murray does not look kindly on those who hold these views that he calls “niche.”

He was not happy that some of us “niche” holders spoke at the National Conservative Conference in Orlando last year. In a subsequent column, he bemoaned that some “thoughtful ex-liberals” might shy away from joining conservative ranks because of the likes of you and me, those who oppose abortion, no-fault divorce, same-sex marriage, and understand the pill has been among the Devil’s most masterful works.

He objects especially that such views may spring from religious belief. He says other than religion, he knows of no principled reason to oppose same-sex marriage. Murray recalled a previous conference in Europe where one of those smelly religious conservatives referred to homosexual couples “as being in a sodomitical relationship.”

Mr. Murray does not like that word. Sodomy is an ugly word for an ugly thing that Mr. Murray writes about downright poetically. I do not know what Mr. Murray does, but I know what he professes, in that he is downright evangelical. In his otherwise clever book The Madness of Crowds, he talks about sodomy as the great mystery that gives straight men a glimpse into something they obsess about, and that is what women feel like when they are penetrated. No kidding.

So blinded is Mr. Murray by his own revolutionary predilections, he thinks the war on the West started roughly on the day Jesse Jackson led a crowd down Palm Drive at Stanford shouting, “hey, hey, oh, oh, western civ has got to go,” which was an effort to eliminate core curriculum of dead white males. This was in 1987.

Each of these laws reflected fundamental aspects of Christian teaching. Striking all this down and much else was a genuine revolution in civilization. And what followed? Contraception was made constitutional, followed by legal abortion, followed by constitutional sodomy, followed by a redefinition of marriage. These were revolutionary moments, whether Mr. Murray sees them that way or not. Indeed, Mr. Murray cheers them. But what followed has been destruction to the West.

Douglas Murray may be quite good—he is quite good—on defending Western art and music, Western horticulture, Western history, and all the rest. Murray is good on these tactics. On strategy, he is bad, very bad. On strategy, in fact, whether Murray knows it or not, he is with the enemy of the West.