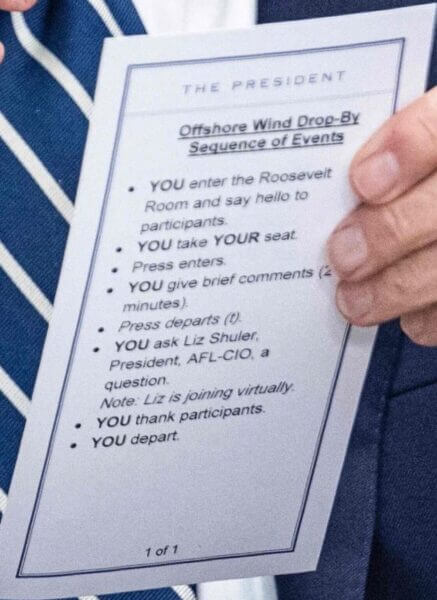 Joe Biden had a meeting Thursday and inadvertently shared his staff-prepared notes with the cameras in the room. At first I thought, “That’s gotta be a Photoshop.” But no, it’s real.

”YOU enter the Roosevelt Room…”
”YOU take your seat…”

Now there are a lot of short little PR meetings that happen at the White House and no president is going to be on top of every one of them. So, staff prepares crib notes, maybe offer a question, whatever. But not like this. This is stage management for someone who desperately needs it.

Who the hell is really in charge here? Ron Klain? Anita Dunn? Dr. Jill? Barack Obama? I ask ‘cause it ain’t this guy. As my dear sainted mama used to say, “This guy couldn’t pour piss out of a boot if they printed the instructions on the heel!”

In his first 18 months in office, Biden has only given 23 interviews. His last was in February with Lester Holt for NBC’s Super Bowl pregame show. By this time, Donald Trump had given 95. If you think that’s just because Chatty Donnie was a narcissist, Obama gave 187. Barack was everywhere — being interviewed for Bar Mitzvahs, supermarket openings, anything that had a camera associated with it.

Now, I’m not a doctor and even if I were I know it’s unethical to make long-distance diagnoses. But isn’t anyone in the White House Press Corps or in Congress just a little curious about what’s going on?

OK. That’s enough. My notes say, “YOU turn off the lights and go to bed now.”