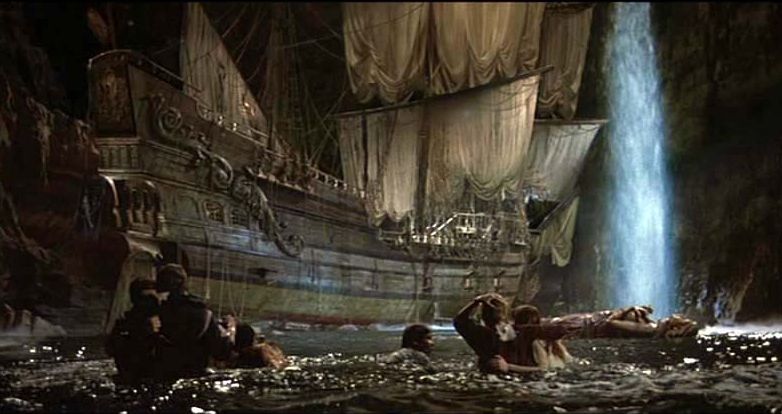 In the immediate nearness of the gold, all else had been forgotten: his promise and the doctor’s warning were both things of the past, and I could not doubt that he hoped to seize upon the treasure, find and board the Hispaniola under cover of night, cut every honest throat about that island, and sail away as he had at first intended, laden with crimes and riches.
— Robert Louis Stevenson, Treasure Island

The northern Oregon coast and a Spanish galleon is not your typical story of buried treasure. There are no palm trees lining the beach on the Oregon coast and no islands for castaways. There are small rocky islands that break the backs of ships. There are beaches that a long boat might come ashore on if they do not capsize in the surf.

There is a long history of ships and crews lost in the Pacific Northwest. Sometime between 1693 and 1694, a Spanish Galleon was lost near Manzanita, OR. Sir Francis Drake may have anchored in Whale Cove, OR, in 1579 to repair his ship in his search for the fabled Northwest Passage. There is a dispute between California and Oregon historians involving the Drake story. He called the area New Albion and drew a map of the anchorage.

You may draw your own conclusions by comparing his drawing and the Google maps photo. You will have plenty of company no matter whose side you take in the Oregon/California debate on a visit to the American west coast by Sir Francis Drake.

The Santo Cristo de Burgos left the Philippines sometime in 1693 and sunk off the Oregon coast in 1694. 328 years later this Spanish galleon is back in the news.

Nehalem-Tillamook and Clatsop peoples, and later EuroAmerican explorers and settlers of what is now Oregon’s north coast, knew that a large ship had wrecked on Nehalem Spit long ago. Archaeological and geological analysis has determined that it was most likely the Santo Cristo de Burgos, the Manila galleon that left the Philippines in the summer of 1693 carrying exquisite Asian trade goods. The ship was headed for Acapulco but was never seen again. Among other things, the wreck left a massive cargo of beeswax blocks, often stamped with shippers’ marks, scattered and buried on Nehalem Spit and in the vicinity of Nehalem Bay.

No one believed Craig Andes when he said he found pieces of a shipwreck that resisted discovery for centuries in sea caves north of Manzanita.

But Andes, a commercial fisherman based in Tillamook County and an avid beachcomber, persisted. Samples of the timbers he found sticking out of the sand in the caves were eventually tested and dated. The timbers are now believed to belong to the wreck of Santo Cristo de Burgos, a Spanish galleon also known as the Beeswax for the valuable wax that formed part of its cargo.

For centuries, artifacts associated with the wreck have washed ashore on local beaches — porcelain and pottery, chunks of beeswax — but the final resting place of the wreck remains unknown. The timbers Andes found will finally give marine archaeologists a chance to study pieces of the galleon itself.

There have been skeptics, but this find has one supportive expert.

For local groups that have searched for evidence for decades, the discovery is an exciting leap “because it’s actual physical remains of the ship,” said Scott Williams, vice president and principal investigator of the Astoria-based Maritime Archaeological Society.

“It also fits into 19th century written accounts that there was wreckage along the cliffs,” he added.

He and others had long assumed the claims were hyperbole or flat-out lies. Shipwrecks don’t typically preserve in shallow water.

But on the North Coast the water is cold and — near the Columbia River outflow — not as salty. There are not as many of the organisms around that eat up wood. Then there are Oregon’s shifting sands. Once the timbers were buried, they would have been pretty protected.

The Columbia River outflow of fresh water can extend as far out to sea as 100 miles.

Williams was one of the experts who initially doubted Andes’ claims. When carbon dating came back showing the timbers were most likely from the Beeswax, Williams told Andes he could say, “I told you so.”

The Beeswax galleon may not have been the only galleon that was lost on its way to Acapulco. There are treasure hunters that believe the Oregon coast may be hiding gold from ships that were lost centuries ago.

I’ll leave you with two links with more information on Northwest Pacific shipwrecks and a history of the Santo Cristo de Burgos.

Before there was Jack Sparrow there was the cult classic The Goonies, filmed in Astoria and Cannon Beach, Oregon. There will always be one more sea cave to explore before the fevered dreams of treasure hunters will be satisfied.