Conservative media has focused on a “bombshell” that Schumer’s office got express warnings from the Capitol Police relaying intel from the FBI that there were specific plans by Trump supporters to use the tunnels to seal off/invade the Capitol.  The story is pitched as yet another example of a failure by congressional leadership to take obvious crowd control precautions.  I don’t see it that way.

Here is the “smoking gun”: 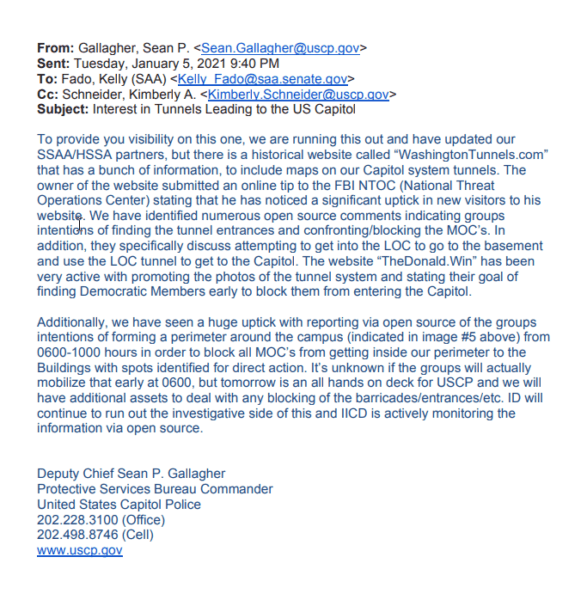 In Schumer’s staff’s defense, they were being told by the USCP that precautions were needed.  So were they supposed to then order the USCP to do what the cops already said/implied they were going to do?  A passive assumption that it was being taken care of seems defensible in this instance.

I also think Pelosi instinctively rejected military protection not because she was in on some conspiracy to let a riot unfold but because she is an old San Francisco Democrat paranoid enough to believe that there are a lot of Republican sympathizers in the military who might join the protestors or follow orders to carry out a coup.  Add incompetence and eternal turf battles among DC’s many federal police forces and the Metropolitan Police and the chances of competent planning were always near zero.

The more interesting question has to do with the source and purpose of this intel–the FBI.  If you have ever been in the tunnels under the Capitol (I used to use them regularly), they are guarded and easy to secure.  The tunnel access points in the connected buildings (south to House buildings, north to the Senate side, and east to the Library of Congress) can also be secured by closing access to the buildings themselves.

It is also noteworthy that there does not appear to be any record of an arrest of any groups trying to use or seal the tunnels or gain forcible entry to any of the connected buildings.  Oddly enough, the crack Jan 6 Capitol assault force itself did not dispatch any commando teams down into the tunnels after breaching the Capitol itself despite all the careful planning no doubt personally overseen by Trump family members.  The insurrection assault force troops were instead too busy taking selfies which suggests that just maybe there never was a plan.

If one were of a conspiratorial frame of mind, one might think the FBI issued a series of largely gratuitous warnings not so much to assist prevention efforts but (a) to establish that the FBI was on the ball and did not miss the warning signs; and (b) to ground a blameless we-told-you-so official status after the event, an event led and encouraged by FBI agents.

Everybody but the FBI was made to look bad.  The political enemies of the deep state are now being treated as traitors and insurrection supporters.  If one were so inclined to see it in that light, it’s mission accomplished for the Bureau while others argue about the Capitol security clown show or the caricature of Trump supporters and Republicans in general.