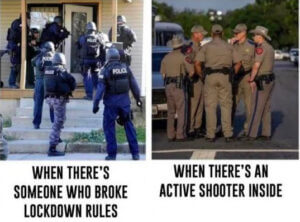 Whatever the merits of this meme, it has the advantage of speaking to the way a lot of people feel — not just about the events in Uvalde but about the entire past couple of years.

There is a visceral sense that, when it came to the highly questionable mandates imposed on the law-abiding populace, law enforcement energetically and eagerly enforced the mandates, even with some excessive enthusiasm and relish. But when it comes to doing their job against actual lawbreakers, well, not so much.

Someone might argue that the behavior of the cops in Uvalde was in some way an artifact of the demonization of the police we’ve seen the last few years. That argument has some potency and might carry the day were it not for the egregious and overzealousness that has been on display these last months where Covid was concerned.

I doubt that we really know yet all of the details regarding what happened in Uvalde. Perhaps some exculpatory things will come out. But the fact that this kind of meme immediately resonates with people would, in a sane world, give politicians pause. But we don’t live in a sane world.

H/T Instapundit for the meme.