I found a data source yesterday for mass shootings in the US since 1982.  I’ll discuss the technical details below.  Here is my graph, which some of you may find interesting: 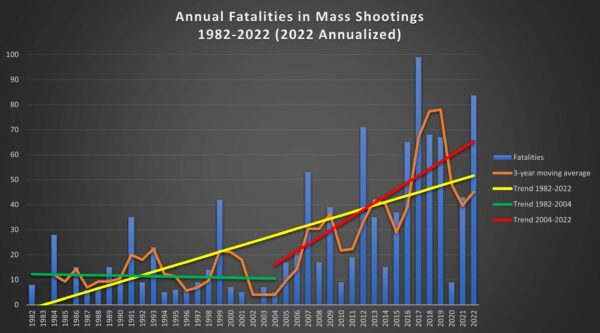 The blue bars are the actual count of total fatalities in mass shootings, for each year. The 2022 figure is annualized, based on the reported mass shootings through yesterday (May 24, 2022). It includes the terrible school shooting in Uvalde, TX.

The orange line is the three-year moving average. The use of this type of data smoothing can help with spotting trends.

The green line is the trend line for 1982-2004.  As you can see, there is a small downward trend (not statistically significant).

The red line is the trend line for 2004-2022.  As you can see, there is a notable upward trend.  The average increase in mass shooting fatalities has been 2.7/year.  The slope is statistically significant (p=.0157).

The overall number of fatalities remains very small, approximately comparable to deaths by bee, wasp, and hornet stings (as discussed in my post yesterday). However, it does appear that this problem is getting worse.

This analysis, of course, relies upon the accuracy of my data source, discussed below.  If a number of older mass shootings were not included in the database that I used, the conclusion about the recent upward trend would be incorrect.

My data source is a mass shooting database by Mother Jones (here).  The explanation for their methodology is here.

Obviously, we don’t have a full year of data for 2022.  I decided to include 2022, and simply annualized the total fatalities reported through yesterday (May 24, the date of the Uvalde shooting).  The total reported fatalities for 2022 is 33, which I annualized to 83.65.