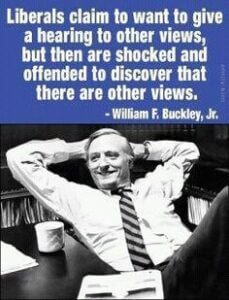 Is anyone else shocked at how ignorant well-off white liberals are when it comes to alternative views about abortion. I am hanging out with North Eastern Democrats who seem to be the Michael Shellenberger variety rather than the Bernie Sanders variety.

As an agnostic on this site, I get exposed to people who do not agree with me daily. I can easily imagine, pro-life or pro-choice women. Simultaneously, I can also imagine communists and Islamists. Now perhaps I have an unusually active imagination, but that still doesn’t explain how half of the American population does not understand the basic ideas of the other half.

I noticed the exact same pattern at Boise State University School Newspaper. On the introductory day there, the Professor said, “Why does everyone think that we journalists types are so left-wing. Also, what pronouns should we use as I discussed investigating multiple companies for any emanation of right-wing thought.”

What makes BSU’s journalism even more perverse is that there are several churches within walking distance who will politely explain right-wing thought. Talking to people on the other side is basic journalism. Yet somehow, left-wing people aren’t capable of that basic empathy. Why?

Anybody’s take on my question would be appreciated but do allow me to tender a theory of my own.

In my experiences, religious people and non-religious people can’t understand each other. If one believes in G-d it affects them from their scalp to their pinky toe. Religion not only affects your beliefs and the logic behind those beliefs; it reprograms your basic values and assumptions at the core of your psyche before it even gets to the thought-through beliefs in the front of the conscious brain.

For centuries leftism has championed sexual liberation and the destruction of the nuclear with the fervor of a religious zealot. The ability to enjoy sex free from political and biological consequences is often the most important value to certain kinds of leftists. Equality mercy and compassion can’t withstand the right to autonomy in matters of sex. Without G-d sex becomes the most important thing. Also, the flesh becomes a thing of worship when one denies the spirit. Look at vegetarianism and alternative medicine among atheists.

But what are your thoughts with regard to empathy or the lack thereof?