Honey may be one of the oldest forms of natural medicine. Its wound healing and antimicrobial properties can be found mentioned in some of our oldest medical literature. The Bible mentions it in proverbs 16:24 “Gracious words are a honeycomb, sweet to the soul and healing to the bones.” Hippocrates, the father of modern medicine who is turning a few thousand RPMs in his grave, was convinced that honey had a variety of healing properties, and he would use it in many of his treatments. He would treat pain with a combination of honey and vinegar. He also encouraged his patients to drink Mead, one of the oldest alcoholic beverages made by fermenting honey with water grains and other spices, the Greeks would refer to it as the “nectar of the gods”.

Perhaps the earliest pharmacy compound in history was theriaca andromachi.  A mixture of multiple ingredients including opium, cinnamon, and viper flesh was pulverized with honey and gum arabic into a paste. It would go viral as something could back then and we find it mentioned often in historic text. Galen, the famous Greek physician, would author an entire book on the remedy, and it was taken regularly by his most famous patient Marcus Aurelius. Pliny the Elder would note in his encyclopedic book Historia Naturales that the Arabians were producing honey strictly for medicinal purposes including applying it to wool and wrapping wounds.

The healing effects of honey are due to a combination of its antibacterial and antioxidant properties. The high viscosity provides a protective barrier to pathogens while maintaining a moisture-rich environment that promotes healing. All honey is not created equal, and the chemical composition will depend on many factors. The polyphenol content of the honey will determine its antioxidant potential, the darker the honey appears the higher the content of polyphenols. A Polish study examining several types of honey would show a significant variability depending upon what type of nectar the bees are using and the chemical composition of the resulting honey.

Commercially there are now several medical-grade honey products on the market around the world. Medihoney is the one you may be familiar with, but other trade names include Revamil, Mebo, Melladerm, and L-Mesitran. Studies have shown their effectiveness in breaking up biofilms of Pseudomonas Aeruginosa, one of our most notorious and commonly drug-resistant infections. There have also been promising results in treating recurrent vaginal yeast infections and cold sores. Using honey or other bee products for therapeutic purposes or apitherapy has become an alternative therapy of sorts. It can be marketed in many ways from the benign consumption of honey all the way to the extreme of getting stung by bees on purpose. Of course, no alternative therapy would be complete without the possibility of Covid prevention so here is an article on that topic. 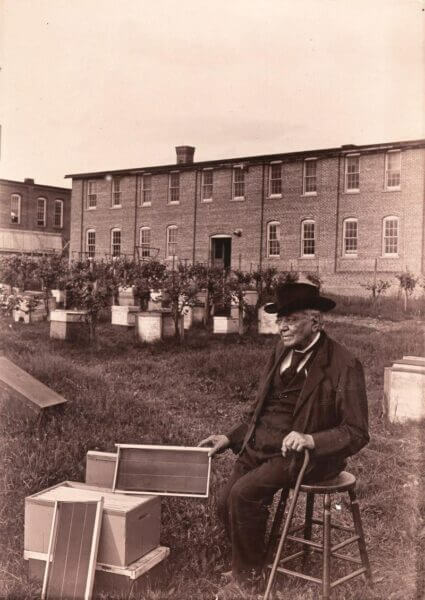 While the domestication of the honeybee certainly goes as far back as hungry humans do, modern beekeeping has not changed much over the past hundred and fifty years. The Reverend Lorenzo Langstroth’s book “On the Hive and the Honeybee” first published in 1853 is still considered to be the foundation of modern beekeeping. The Langstroth beehive still bears his name and is what comes to mind when most people picture one. The book is also a great read albeit a bit preachy, but the man was a Reverend so finding God in his honeybees should not be a surprise.