Our company is currently building a 700,000-sq.-ft. distribution center in Sweetwater, TN. This project is for Red Stag Fulfillment. They are a third-party warehousing and fulfillment center for E-Commerce.  It’s a cool thing: basically, you make a product that you want to sell online but don’t want to have to store and/or ship said product.  That’s where Red Stag comes in with automated warehousing, same-day order fulfillment, inventory tracking, etc. Anyway, that’s just the set up, not the point of this post. Last Wednesday was the official “groundbreaking” ceremony for the first building on its 420-acre campus. Here is a link to a Knoxville News Sentinel article with photos and descriptions of the event.

Along with around 250 people in total, it was attended by lots of dignitaries, including Red Stag investor Jordan Mollenhour of Mollenhour Gross and Tennessee Governor Bill Lee. Bringing 3,500 jobs to the area is a fairly big deal, so many other politicos were there as well as developers, architects, engineers, and media.

Our superintendent on this project is named Jesus Magana. Jesus is a terrific superintendent (I wish I could clone him) but typically at these types of events, the people doing the actual “work” are mostly afterthoughts compared to the VIPs in attendance. Well, not last Wednesday… the owner Jordan, is very involved with this and other projects Jesus has worked on.  He also takes an actual interest in the workers on his projects, providing them things like a small building at every project with complimentary beverages (coffee, sodas), microwaves, etc.  Over time, he has come to appreciate Jesus’ talents as a job superintendent doing quality work and getting things done on schedule despite typical construction delays like inclement weather and supply issues. During his groundbreaking speech, when thanking those involved, Jordan made sure to specifically mention Jesus by name. Then when Governor Lee spoke, he also mentioned Jesus!

Next on the agenda was a somewhat unique ceremony where several dignitaries lined up behind some small concrete panels we had poured just prior and pressed their handprints into the concrete. These concrete sections will later be cast into the floor to memorialize the event. After the initial group had finished, we noticed there was one additional square that hadn’t been used. It was suggested that Jesus put his prints in as well and after some gentle coaxing, I managed to wrangle him over there to do it. His smile was beaming by that point as reporters came over to talk to him. Then, before loading up in his SUV, Governor Lee came over and shook his hand and made a picture with all the guys of the small crew we had present.

We will probably need to get Jesus a new, larger hardhat for his big head but it was nice to see credit given where credit was actually due. 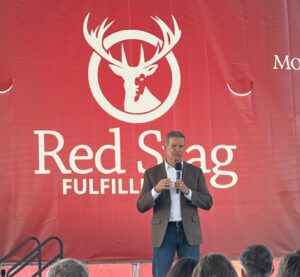 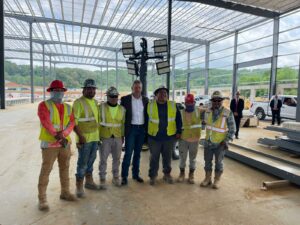 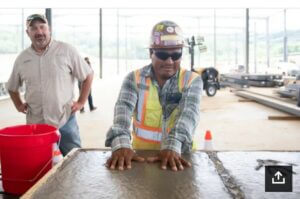