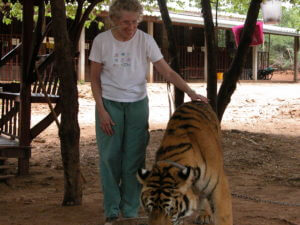 Have you ever had a moment when you realized that you made a decision to do something incredibly stupid and wondered if you had gone temporarily insane?

I didn’t think I was the only one.

And yet, in the moment, it was too good an opportunity to pass up.

We were on a trip in Thailand and on a whim, our tour guide (who had also become our friend) suggested we take a side trip that hadn’t been on our agenda. We were intrigued so, of course, we agreed to go.

The side trip was to the Tiger Temple, a refuge for tigers managed by a group of Thai monks. The refuge was created when a Thai came to the temple with a tiger cub that he had captured in the forest; he realized that the larger the tiger became, the more unmanageable and dangerous it would be. He was reluctant to abandon it in the wild (possibly thinking it had lost its natural instinct to hunt for food) and left it with the monks. It didn’t take long for the word to get out to other foolish Thais who had also adopted tigers that they had a place to take their cubs-becoming-adult tigers.

And the monks took each one in.

Over time the temple adopted many tigers, who also bred and had more cubs. (There’s no wild creature more adorable than a tiger cub.)

On the day we arrived at the temple, we had an opportunity to meet privately with the abbot of the temple. After a brief chat, he invited us to visit the tigers, which were in large cages. He explained that they took the animals regularly on leashes into an uninhabited area nearby, removed the leashes and the tigers were able to roam freely. The monks had developed such a rapport with the tigers that they could pet and scratch the animals and they responded to their instructions. 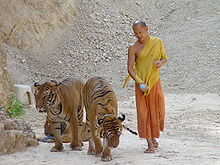 As we approached the cages, the abbot told us that he could bring out two cats, one for my husband and one for me. He would temporarily put each one on a heavy chain which he wrapped around two trees, and we would be able to pet them.

Of course, my husband jumped at the chance, while I consented a bit reluctantly. The abbot asked us to stand nearby as he connected each tiger to a chain, and then asked each of us to approach the tiger from behind; the tiger would hear but not see us. If the tiger turned to look at us, the abbot would gently push his head forward so that it wouldn’t mistake us for dessert. Then the abbot told us we could pet the tiger.

The hair was coarse to the touch. Underneath my hand, I could feel the incredible strength of the tiger emanating from his body. I continued to stand there, mesmerized by the markings of the beast and the unbelievable power of the moment. Finally, I stepped aside and away. The tiger meanwhile had tried to get a look at me a couple of times, but each time the abbot calmly moved the tiger’s head forward.

I will never forget that magical and foolish moment.

I also just remembered that I had an elephant step on me once. A story for another time . . .

[Eventually, swindlers tried to take over the management of the Temple and pushed the abbot aside, creating a tourist attraction. After their actions were discovered by the authorities, including abuse of the tigers, the temple was closed down and the tigers distributed to facilities where they could be properly cared for.]